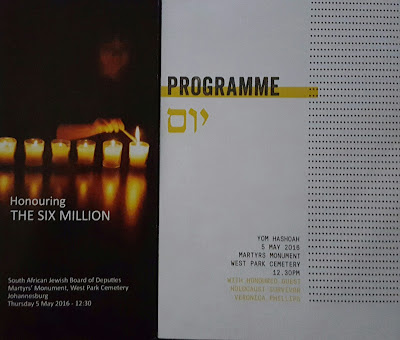 I thought her voice would falter. I thought she would dissolve in tears. But the wavering in her throat, no doubt underscored by an unimaginable night-train of emotion and by the burden of her advanced years, never broke. Her face may have been pale as a shin-bone in moonlight, but her message rang clear.
“I saw things no man should see. I saw children murdered by educated doctors. I saw babies killed by nurses. I saw young people shot by high school and university graduates… so I am suspicious of education. Yes, it is important to learn literature and maths, but we need to make sure that our children learn humanity too.”
The elderly Hungarian lady with the ivory skin who was among the 60,000 forcibly removed by cattle-car train to death camps under the Nazi regime was speaking to thousands gathered in the moderate blaze of an autumnal African sun under the Martyrs Monument’s giant sculpted shofars, the ram’s horn bugle that rings out during Rosh Hashanah; clenched in bronzed resolution, the defiance of the sculpture recalled the perhaps 30,000 Jews who actively resisted the Nazi “Great Devouring” – to borrow from the Romani – as defiant partisans of all humanity against annihilation.
In echo of the résistants’ ingrained human response to atrocity, a chubby old man crowned with wisps of silver hair and squeezed into a coal-black suit sang The Partisan Song: “Geshrieben is dos lied mit bloot oon nit mit blaai / Es iz nit cane liedfoon a failgel oif der fraai / Dos hot a fold tsuvishen fallendike vent / Dos lied gezungen mit naganes in die hent.” (“For when we wrote this song with blood and not with lead / When we lived not with the living but with the dead / And we sang this song behind the ghetto walls / when we cried for help, and no-one heard our calls.”)
It was too late for many but the calls resonated internationally: at the memorial, the Afrikaans inscription about the “onmenslikheid” – inhumanity – of the era was most easily readable to me on the marble plinth where Hungarian survivor Veronica Phillips told of how her schoolgirl days – already blighted by teachers who had declined to recognise her academic achievements because she was a Jew (“Jews are rats” appeared on chalked her classroom blackboard) were inexorably eclipsed when her family was removed from its safe-house by Arrow Cross fascists who tore up their Swiss-issued passports and split her family forever.
Finally by sheer luck, she was plucked from an SS-supervised queue at the very doors of the gas chambers at Ravensbruck because she spoke German, to serve as slave labour in an aircraft factory near Dresden, where she witnessed the Allies’ own genocidal fire-bombing of the city.
And yet here she stands before us.
She was a child then, so never a partisan.
Yet here she stands as a vital challenge to our humanity.
A schoolgirl of today stands in the sun and intones a resonant song in Hebrew, alternating with English: "Everyone has a name / given to him by the mountains / and given to him by the walls / Everyone has a name / given to him by the stars / and given to him by his neighbours / Everyone has a name / given to him by his sins / and given to him by his longing / Everyone has a name / given to him by his enemies / and given to him by his love..."
Another young girl provides what I think is the appropriate coda by reciting a poem, The Cheerful Pessimist, a defiantly up-beat text written in a concentration camp by one of the six million who did not survive. It ends: "Long live joy!" 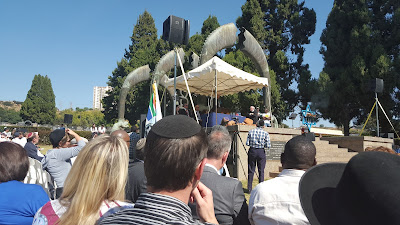 Posted by Michael Schmidt at 01:32