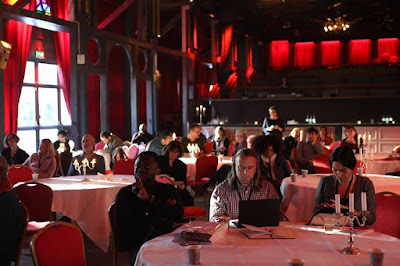 Working as the official minute-taker the at Safe Havens 2016 in Sweden, flanked by my friends Nigerian author Jude Dibia and HIAP's Eleni Tsitsirikou.

Troubling year, 2016: we lost Prince and David Bowie, and gained Trump as US president-in-waiting, and Erdoğan's state of emergency, but I was incredibly fortunate to do some fascinating work:

Jan: Submitted my report to ICORN and ProJourn on Safe Havens 2015, started planning on Unexploded Ordnance: Untold Southern African Stories, finished writing my 6th book, Isandlwana - a Love Story, started a research group for my multimedia project The People Armed: Anarchist Fighters Verbatim which is already partly complete.
Feb: Worked as a fixer on the 2015 Mt Sumi Massacre in Angola for the BBC, started work on the revision of Cartography of Revolutionary Anarchism for its Spanish and Arabic translations (I have been offered Farsi and Amazigh translations too).
Mar: Interviewed by radio station ChaiFM on A Taste of Bitter Almonds, resumed the primary rewrite of Wildfire: Global Anarchist Ideological and Organisational Lineages, marking the 16th year of research and writing into this companion volume to Black Flame (2009).
Apr: Published on Africa's new-generation air forces, A Taste of Bitter Almonds launches at the Roving Bantu Kitchen and at the University of Johannesburg, started work on the alternate "six waves" version of Cartography.
May: Lead author of an official civil society submission to the Department of Justice & Constitutional Development on the National Action Plan to Combat Racism, Racial Discrimination, Xenophobia, and Related Intolerance, started writing a new book concept, Notes for a Funeral, started planning my first novel, Jeanne & Giles.
Jun: Lead author of first survey of trans-diverse communities in four Southern African countries, Drinking With Ghosts and A Taste of Bitter Almonds long-listed for new national book award, relocated persecuted Zimbabwean human rights defender into exile in Namibia for the World Organisation Against Torture.
Jul: Published on the future of Africa's cities and on visions of mapping Africa, covered and presented at Southern African Human Rights Defenders Network summit, covered 2nd IAJ Racism Conference, hosted a talk at the Johannesburg Holocaust and Genocide Centre commemorating the 22nd Anniversary of the "100 Nights" Rwandan Genocide following the first South African screening of Beate Arnestad's documentary Telling Truths in Arusha.
Aug: Started work with the Pan African Human Rights Defenders Network on getting Joburg on board ICORN, covered the Menell Media Exchange 2016 (I helped found the initial MMX in 2012), resumed work on Wildfire, started the rewrite of the Anarchist Communist Mass-line series as a single book, delivered copies of my anarchist books to comrades opposing the dictatorship in Swaziland, initiated a group around the film project The Dispossessed.
Sep: Covered Africa Aerospace & Defence 2016, published on the failures of BRICS in the arms industry, finalised the design of my website (thanks Angela!), worked on the Mass-line series, approached by Polisario regarding covering its new campaign for the liberation of Western Sahara from Moroccan colonialism.
Oct: Lead author of Durban AIDS Conference report on decriminalising gender, published on reassessing genocide and ethnic boundaries in Africa and on a comparative analysis of SA now and 1960s Italy, sold books at the Rocking for West Papua gig in support of that country's liberation from Indonesia, covered IAJ/AKF Reporting Racism Conference, briefed by SABC 8, worked on Wildfire, documentary Neither God nor Master: A History of Anarchism in which I am interviewed is screened to acclaim in Sweden, submitted songs to four local bands for EPs they are working on.
Nov: Worked on Wildfire and on the Mass-line series, presented at and covered SA's first-ever conference on Unmanned Aerial Vehicles (drones), started discussions on a Japanese translation of Black Flame, getting Cape Town on board ICORN comes a step closer with the signing of an agreement between the mayors of Cape Town and Malmö.
Dec: Published on the late Fidel Castro's politics and on SA's new city coalition politics, landed research grant into apartheid SA's worst war-crime, attended Safe Havens 2016 in Sweden as report-writer, submitted my report on Safe Havens 2016, resumed work on Rasha Salti's and my multi-arts project Not Night, but An Absence of Stars, worked on Wildfire and the Mass-line series, continued support work on Radio Freedom (Zimbabwe) as I had throughout the year.

I am tentatively hopeful for an even more challenging and constructive workload in 2016 ;)