In the Shadow of a Hurricane: Global Anarchist Ideological and Organisational Lineages 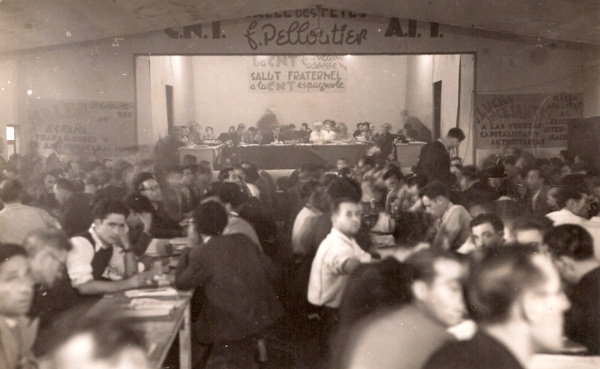 Anarchism survived the 1939 defeat in Spain - and went on to almost seize power in countries such as Chile in the 1950s and to fight neo-fascism globally from Uruguay in the 1970s to Rojava today. The picture shows the 2nd Congress of the Spanish Libertarian Movement (MLE), Toulouse, France, 1961. In the Shadow of a Hurricane, my 17-year study, will be the most comprehensive global history of the anarchist movement over 15 decades. I hope to have the writing done by the end of the year and be ready to hand it over to my editors and indexers. Then it's sourcing pictures, finalising the maps I have drawn, and getting a graphic artist to illustrate key organisational lineages. Having now written the introduction and much of the concluding chapter, it currently stands at 390,000 words - and that's *after* having extracted 42,000 words a year ago to slim it down! :D For those non-writers who ask me "how many pages is that?," well, if formatted in the way I expect, it will be well over 1,000 pages ;) ... and of course the maps, graphics, and pictures will add a few more... My nearest competitor, Peter Marshall's Demanding the Impossible: A History of Anarchism (1993), by comparison, weighs in at a mere 768 pages ;)

IN THE SHADOW OF A HURRICANE

“Anarchism is no beautiful fantasy. No abstract notion of philosophy, but a social movement of the working masses; for that reason alone it must gather its forces into one organisation, constantly agitating, as demanded by the reality and strategy of the social class struggle.” – Nestor Makhno, Ida Mett, Piotr Arshinov and others of the Dielo Truda group, Organizatsionnaia Platforma Vseobshchego Soiuza Anarkhistov: Proekt (Organisational Platform of the General Union of Anarchists: Project), Paris, France, 1926

Chapter 2: Anarchist Mass Organisation 1860s-1930s: the Andes, Central America, and the Caribbean
(Bolivia and Peru: the FOL, FORPe and the indigenous question; Colombia and Ecuador: bitter battles at high altitude; Venezuela, French Guyana and Surinam: the UOV and SAF in the margins of Bolivarismo and colonialism; Mexico: the PLM, COM-Lucha, CGT and FAC, the Flores Magón brothers, Antonio Gomes y Soto and the Mexican Revolution of 1910-1922; Nicaragua and Central America: Augusto Sandino, the CAS, FOH and the “banana republics”; Puerto Rico: the FLT, Louisa Capetilla and the question of who gets to wear the pants; Cuba: Enrique Roig San Martin, the FTC, FGAC, and the CNOC against imperialism, bigotry and the dictatorial elite)

Chapter 4: Anarchist Mass Organisation 1860s-1930s: Central and Eastern Europe
(Pre-revolutionary Russia, the Ukraine and the Georgian Commune of 1905-1907; the NWU, Cherny Peredyel, Afanasy Matiushenko and Varlaam Cherkezov among the narodniks and terrorists; Bulgaria and Romania: the LCB, FAKB, BONSF, FAY, Mikhail Guerdzhikov, Gueorgui Cheitanov, and platformism armed; Greece: the Democratic Popular League of Patras, “Kostas” Speras, the SEMS and the lessons of direct democracy; Poland, Finland and the Baltics: the ZZZ, FAGPL and the shadow of Russia; Czechoslovakia: the FÈAK, ZJH-O, Bohuslav Vrbenský and the seductions of nationalism; Hungary and Austria: the URW, URS, Sandor Czismadia, Ervin Szabó and Leo Rothziegel in the heart of the empire; Yugoslavia and the Balkans: Miloš Krpan, Krsto Cicvarić, Paul Zorkine and the direktaši workers’ faction)

Chapter 7: The Global Rupture of 1914-1923, and the Russian and Ukrainian Revolutions
(The Global Rupture: ten years that shook the world; The Russian anarchists and the February Revolution of 1917; The PACF, Iosif Bleikhman and the July Days; Anarchists in the October Revolution of 1917; Anarchists and the Bolshevik state; The Kronstadt Uprising and a “Third Revolution”; Marusya Nikiforova, Nestor Makhno and counter-power in Ukraine; The Ukrainian Revolution and Bolshevik Counter-revolution; Nestor Kalandarishvili, G.F Rogov, I.P. Novoselov, the AFA and the defence of the Revolution in Siberia; The anarchist underground in Ukraine, Russia and Siberia)

Chapter 8: A Blazing Star at Midnight: Anarchist Resistance to Red and Brown Corporate States
(Anarchism and the rise of Bolshevism; The Comintern, Profintern and the IWA; The conditions for survival, and the Spanish phoenix; Anarchism and fascism in Spain; Fascism or revolution; Revolution in agriculture and industry; Revolution and war on fascism; Crisis in the anarchist ranks; Counter-revolution and the anarchist split; “Crushing fascism once and for all”; Water and oil: anarchists and government; West European partisans against brown fascism; East European partisans against red fascism)

Chapter 9: The Cold War: Syndicalists, Guerrillas and Imperialism, 1940s-1975
(Syndicalism after the war: the Metropole and New Zealand; Syndicalism after the war: the Heartland; traces of libertarian socialism in Africa; Ghadarite and anarchist echoes in India and Indonesia; anarchists and the dismantling of the French Empire; anarchist revival in East Asia; Anarchism and cracks in the East Bloc; Anarchist resistance in the Heartland; The Cuban Revolution and Counter-Revolution; The New Left, “Counter-Culture” and the Global Revolt of 1968-1969; Shengwulian: libertarian socialism re-emerges in China; Yugoslav "syndicalism" and Caribbean "self-management"; Post-war counter-power: The Uruguayan citadel; Anarchist guerrilla forces in the Heartland; Anarchist guerrilla forces in the Metropole)

(The collapse of Iberian fascism and the resurgence of anarchism; Anarchist alternatives to authoritarian “autonomism” in the Metropole; Turkey, the Middle East and the Iranian Revolution of 1978-1979; Japan, South Korea, India and reaction in the Far East; Zapatismo, Magónismo and resistance in the Andes; Self-management in the Southern Cone; African anarchism versus capitalist “liberation movements”; The end of the Soviet Empire, the IWA and the independent revolutionary syndicalist unions; Social insertion of the broad anarchist movement in the new millennium; The neo-Makhnovist revolutionary project in Ukraine; The Arab Spring and the Rojava Revolution)