Complexities of the Stolen Land Debate 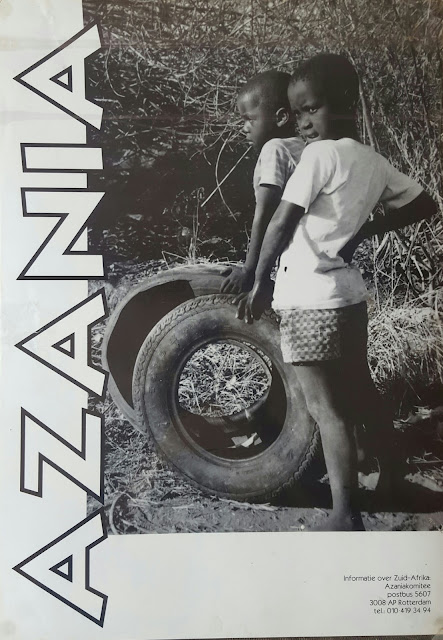 A Dutch anti-apartheid poster given to me by the leader of KwaZulu-Natal's Pan-Africanist Congress back in 1993 during a series of interviews in which I sought to destigmatise the PAC and Azapo in the eyes of our then-mostly-white Natal Mercury readership.

In the wake of last week's landmark vote by the African National Congress (ANC) and Economic Freedom Fighters (EFF) in the National Assembly that Section 25 of the Constitution's Bill of Rights be amended to allow for land requisitions without compensation, there has been a flurry of (anti-)social media commentary, mostly from alarmed, propertied whites.
Well, firstly, seeing as the state already possesses huge landholdings that it hasn't redistributed in more than two decades in power, despite falling well behind its own land-redistribution targets, that apart from for ordinary purposes such as road-building it hasn't expropriated any private land for redistribution in that time, and given that the markets and big capital (notably AgriSA, the representatives of commercial agriculture) reacted with barely a murmur, I suspect the constitutional amendment will prove to be a mere political device intended to reunite the ANC with its disaffected support base, and that it is intended as a dead letter.
We may, however, see a few isolated, salutary, high-profile expropriations to pacify that base and discipline its perceived "white monopoly capital" enemies. That the two parties that traditionally represented black land rights in South Africa (also known as Azania), the Pan-Africanist Congress of Azania (PAC), and Azanian People's Organisation (Azapo) are declined into insignificance is a pity in my view. I voted PAC in the landmark 1994 all-race elections because I saw the as the only left party that was sufficiently nationwide in its perspectives, revolutionary, and possessed of a burning desire to return stolen land to the black, indigenous, coloured and Indian dispossessed. Today, the PAC has a lone seat in the National Assembly, while Azapo has none, opening the field to the right-populist EFF and, purely opportunistically, the centrist-neoliberal ANC.
Author Graeme Condrington correctly notes that the amendment to the Constitution would be at least the 15th time that land expropriation laws have been passed in South Africa (though he includes the Glen Grey Act of 1894 before SA existed) - and that they were all aimed at dispossessing people of colour in favour of white settlers. To be honest, I feel the vote last week was really about radicalisation without rationalisation, rather than expropriation without compensation.
Nevertheless, land restitution is complex and emotive (people of colour also dispossessed indigenous people, so it's not merely about white settler colonialism), unaccountably delayed under the ANC, has been distorted by unrealistic expectations (the ability of restituted owners to cohere as viable farming communities - underscored by a lack of financing and skills transfer to emergent farmers), and has been distorted by the bogus claims of black and white fascists / populists / racists (Black First Land First, EFF, AfriForum, AWB etc). The nuances of the debate reminded me of a visit I paid to former PAC president Clarence Makwethu back in 2001, recounted here in my book A Taste of Bitter Almonds.