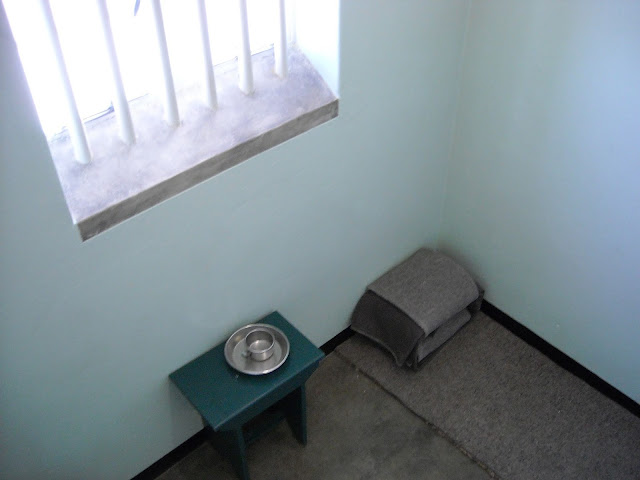 I met Nelson Mandela on several occasions, but unfortunately do not have scanned the photographs I shot of him in Durban in the 1990s, so here is a picture I shot of his prison cell on Robben Island in 2009. Its chilly austerity in the Cape winter is painfully obvious.

Perhaps because like most South Africans classified as "white" (though I am of mixed race), I did not grow up in the Chartrist tradition, perhaps because I preferred the radicalism of the Pan-Africanist Congress of Azania to the vague leftism of the African National Congress, or perhaps because I simply instinctively distrust the hagiography surrounding mainstream heroes, Nelson Mandela was never "my guy". But in this centenary of his birth, and having listened to Barack Obama's speech in Johannesburg yesterday, attempting to roll back the reactionary wave that is washing over the world, I thought it would be interesting to publish this section from my book A Taste of Bitter Almonds: Perdition and Promise in South Africa (BestRed, Cape Town, 2015) in which I recall an unintentionally funny meeting between Mandela and myself.

The funeral service of SACP stalwart Govan Mbeki – father of
President Thabo Mbeki – is winding down. Oom Gov, as he was
known, died in the city last week aged 91, and his remains were
borne here in a coffin on a howitzer carriage draped in the national
flag. The carriage was accompanied by the slow-marching National
Ceremonial Guard in their antiquated emerald-green uniforms,
carrying bolt-action rifles with their all-white paint jobs a little worn.
I’m now the Sunday Times’s Eastern Cape bureau chief – a grandiose
title for a job that involves running a tiny office on the roof of The Eastern
Cape Herald’s building in Port Elizabeth, together with 77-year-old
sports reporter Mel Channor and freelance photojournalist Marc
Pradervand – so I’m covering the funeral. The pomp and ceremony
are a far cry from the modest affair that Mbeki himself had envisaged
in the weed-ridden Zwide Cemetery, which has been cleaned up
by community volunteers for his burial. Instead it resembles a state
funeral, with flags across the city, which years ago named its main
road after Mbeki, flying at half-mast, and thousands of the poor and
the powerful – from township residents and MK veterans to former
Zambian president Kenneth Kaunda and Lesotho’s prime minister
Pakalitha Mosisili – paying their last respects.
At the funeral Grandson Karl Mbeki read out a letter from Walter
Sisulu, who apologised for not being able to attend the ceremony.
Sisulu, who is now 89, recalls in the letter how he and Mbeki first
met in the 1930s and that they had ‘many differences of opinion’,
citing as an example that during the Rivonia treason trial (which
resulted in them being jailed), Mbeki ‘insisted the national executive
[of the ANC] had approved the Mayibuye Plan’ – the famous plan to
wage an armed struggle. Sisulu describes both Mbeki and himself as
‘stubborn’ and says that the argument went on for years behind bars
on Robben Island. But in the letter, Sisulu says he felt only ‘pride and
great sadness’ at the passing of his ‘age-mate, comrade and friend’.
Karl Mbeki, who spoke on behalf of the Mbeki family, then read a
touching poem he had written about a visit to his grandfather on
Robben Island when he was 14, and the old man 72. The poem ends
by saying that despite Mbeki’s grim surroundings, ‘strength radiates
from behind his glasses’.
Former president Nelson Mandela, who is now 83 years old, paid
tribute to Mbeki, calling him ‘one of the truly great sons of Africa’
and ‘a man of magnificent character’ who was ‘a monument to the
intellectual strength of [the] struggle’. Mandela said he owed much
to Mbeki senior’s ‘decisive mind’. ‘We are not only bidding farewell
to an individual,’ he said. ‘We are losing a piece of ourselves.’ Deputy
President Jacob Zuma, speaking on behalf of the government, said
that ANC leaders ‘regarded Mbeki’s generation... as our fathers’ and
described his death as ‘the end of an era’. President Mbeki maintained
a steely calm throughout the proceedings.
Now that the ceremony is over, Mandela walks slowly down the
steps from the stage and, shadowed by his bodyguards, strolls along
the front row of invited guests who are mostly MK veterans, shaking
hands one by one and exchanging pleasantries. I’m hovering about,
just watching for any interesting interactions, when I somehow get
in the way and before I know it, Mandela is shaking my hand, his
rheumy eyes locking with mine briefly before he moves on. Then,
out of the blue, Eastern Cape Premier Makhenkesi Stofile, who is
not a small man, swoops down on the towering yet frail Mandela
and, grabbing him by the elbow, turns the surprised old man about
on his heels and steers him straight back towards me. Beaming with
enthusiasm, Stofile points at me and tells Mandela, ‘Do you know
who this is? This is Michael Schmidt of the Sunday Times!’
I’m as floored as Mandela is; he certainly looks a little bewildered
to be propelled into engaging with me. We both give embarrassed
smiles and, seeing that the introduction seems to require it, shake
hands again and ask after each other’s health, before the world’s
most famous elder statesman can make good his escape.