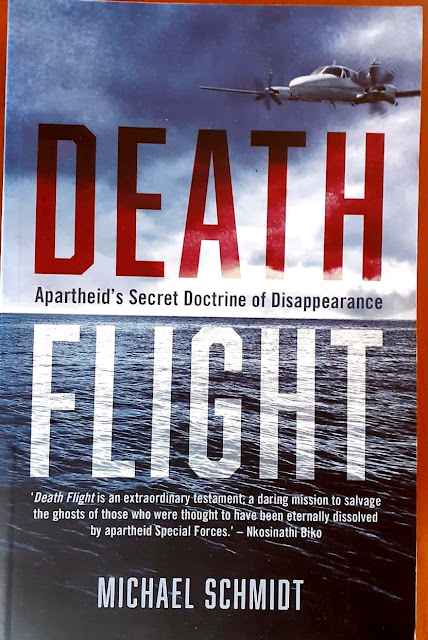 Death Flight: Apartheid’s Secret Doctrine of Disappearance
(Tafelberg, Cape Town, South Africa, 2020). My sixth book to be published is now in many stores like Exclusive Books and will be available for sale both in hard-copy and as an e-book from Amazon and other platforms from 30 July.

‘They must never return… This was the only answer.’ – Colonel Johan Theron, Delta 40 co-founder

In the late 1970s, as the apartheid government fought a desperate and dirty battle to stay in power, its security forces devised a chilling new tactic. A shadowy, top-secret unit called Delta 40 was established, tasked with the murder of hundreds of ANC, PAC, and SWAPO members. Victims’ bodies were flung from aircraft into the Atlantic Ocean off the coast of South West Africa. Death Flight provides the first detailed account of these sinister missions. Seasoned investigative journalist Michael Schmidt traces the journey of Neil Kriel, Delta 40’s first commander, from his boyhood in Rhodesia to his dark deeds as an apartheid operative in the 1980s. Schmidt also tracks down Kriel’s partner, Colonel Johan Theron, as well as several other veteran Special Forces operators. Based on the detailed analysis of flight logs, court records, military studies, and numerous interviews, Death Flight sheds shocking new light on one of apartheid’s darkest chapters.

"This book will make your stomach turn. Do not avert your eyes… Death Flight shines a much-needed light on some of the darkest corners of a regime waging a desperate and dirty fight against the inevitable. It is the first detailed exploration of the horrendous practice of flinging murdered prisoners into the depths of the Atlantic Ocean. By following the thread of apartheid’s violence into Namibia, Mozambique, Zimbabwe, Lesotho, Angola, Swaziland, and Zambia, Death Flight elucidates the transnational nature of this crime against humanity. In so doing, it raises fascinating questions about the role of international law in the attainment of hitherto evasive justice… Death Flight is a daring mission to salvage the ghosts of those who were thought to have been eternally dissolved, by apartheid Special Forces, deep in the oceanic waters off our shores. It is destined to become an invaluable tool, connecting the dots in the quest to ensure that no victim of the deadly hand of apartheid is left unaccounted for." – Nkosinathi Biko, son of the murdered Steve Biko, and board member of the Steve Biko Foundation

"… full of information but also packed with incredible scenes, worthy of a spy novel… absolutely breathtaking. The similarity of illegal repression groups’ practices, organised from the state, between South Africa and Argentina has yet to be analysed. The fact that Rubén Chamorro, the director of the School of Navy Mechanics, site of the main clandestine detention centre, where 4,000 were assassinated in death flights, was appointed Navy Attaché in the Argentine Embassy in Pretoria back in 1979 cannot be a coincidence. At that time, across the Atlantic Ocean, hundreds of anti-apartheid activists were being eliminated using exactly the same method… The lesson seems to be that no peace can be achieved without justice, and no justice can be achieved with oblivion." – Miriam Lewin, Argentine journalist, survivor of two illegal detention centers, and author of two books on the Argentine death flights, Skyvan and Final Destination

"An intriguing read that lays bare the inhumanity of Apartheid crimes. It does so despite the best efforts of the criminals to hide their crimes. May we never forget the lives lost in the struggle for our freedom." – Lukhanyo Calata, son of the murdered Fort Calata, journalist and co-author of the book My Father Died for This.

“The work he has done before Death Flight speaks for itself, but with this book he has gone further, challenged not only himself but all of us in his quest for truth and in revealing injustice. What I appreciate about Michael’s work is that it is brave and uncompromising. He has been talking to me about his research and everything he uncovered while writing this book. I have been struck not only by his commitment to telling a part of history that most of us might find too uncomfortable to know, but also by how much of his heart has gone into this book. I hope everyone gets a chance to read Death Flight because we cannot afford not to know the details of this part of our history.  We cannot afford to look away from the lives we lost, but most importantly, we cannot afford to go on thinking that history can only be seen as black and white.”  – Kagiso Lesego Molope, South African novelist

PART I: The Rhodesian roots of SA’s dirty war

1. A youth in the shadow of an insurgent war
2. From Pretoria bar to Rhodesian bush
3. Behold a pale horse: Rhodesia’s biochemical warfare
4. Horrors and honours
5. Neo-Nazis and mercenaries enter the fray
6. ‘The doctored bodies are in the back’

PART III: The shackles come off: From Delta 40 to Barnacle

19. Mandate to kill
20. A war crime at Lanseria
21. Two hammers: Barnacle kills its own
22. The founding chief’s last flights
23. Barnacle in its prime
24. ‘Like a James Bond movie’
25. A changing of the guard
26. Barnacle’s role in the Maseru Raid
27. Small-teams success
28. Trained, betrayed, murdered
29. The Wonder Air death flight
30. A death flight over the Indian Ocean
31. Barnacle’s final small-teams mission

39. The end of the Border War
40. The CCB shuts down
41. Shadow-boxing: The Trial of the Generals
42. Half-truths at the Truth Commission
43. Dual exposed: the Wouter Basson trial
44. (Re)disappearing the disappeared
45. Quietus: the founding chief’s exit

Posted by Michael Schmidt at 04:42