The South African Cities of Refuge Project grew out of a meeting in Johannesburg in 2011 between Swedish cultural activist Fredrik Elg, South African actor Gerhard Rudolf, and myself, a South African journalist and free press activist. The animated dinner resulted in me in my capacity as Executive Director of the Institute for the Advancement of Journalism (IAJ) being invited by Elg to attend the 2012 General Assembly of the International Cities of Refuge Network (ICORN), a network of cities and regions that had agreed to provide safe haven for persecuted journalists and writers.

The General Assembly occurs every two years and is a grand gathering of ICORN staff, Cities of Refuge officials, and of former and current “guest writers,” those who ICORN has assisted in securing the interim relief of two years’ sponsored exile in an ICORN host city. Applicants for guest writer status are vetted by PEN International’s Writers in Prison Committee to ensure they are legitimate writers or journalists and that the nature of the threat against them is serious enough to warrant emergency exile. The profile of guest writers over the years has demonstrated that most have experienced the jackboot of repressive regimes, whether in Belarus, China, Iran, Syria, or elsewhere, but some are the victims of sub-state forces such as terrorists and criminal syndicates.

Read the rest of the report here:
http://pensouthafrica.co.za/sa-cities-of-refuge-project-repaying-south-african-exiles-debt-of-hospitality/
Posted by Michael Schmidt at 08:30 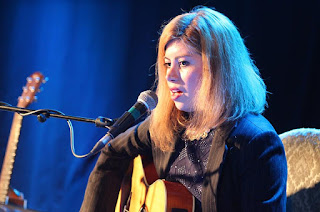 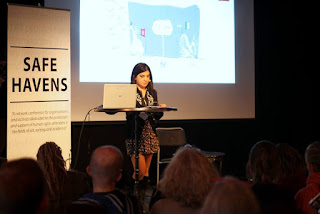 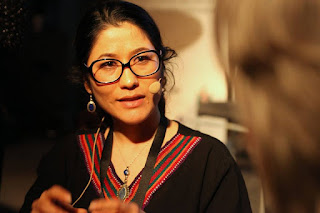 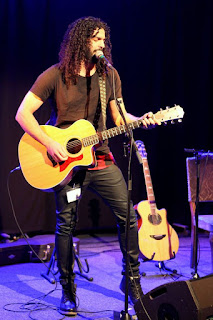 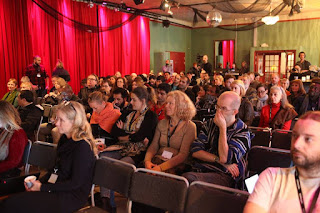 Some of the incredible people I met at the Safe Havens conference in Sweden last month: Tunisian blogger and keynote speaker Lina Ben Mhenni (second from top), Iranian singer Farzane Zamen (top), activist-musician Ramy Essam of Egypt (with guitar), and Afghan playwright Monirah Hashemi - thanks to Fredrik Elg for the pictures!. All together in the fight against xenophobia, bigotry and fascism!

The conference - the first of three annual gatherings for which funding has been sourced - drew together human rights organisations from across the world who are involved in providing refuge for persecuted journalists, writers, academics, artists and musicians. Against the backdrop of rising neo-fascism in Europe in the light of the mobility/migrancy crisis precipitated by Islamofascism in Syria, we debated how best to share our resources and expand our operations. I reported on the project to bring South African cities on board the International Cities of Refuge Network (ICORN) www.icorn.org.
Posted by Michael Schmidt at 02:51

A Taste of Bitter Almonds is on the shelves! 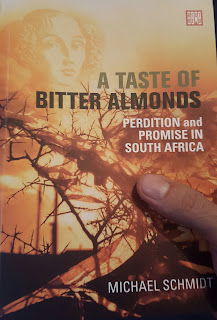 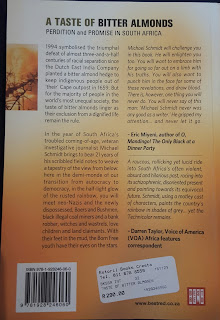 A Taste of Bitter Almonds is on the shelves. It's a selection of my journalistic field notes on 21 years of perdition and promise in transitional South Africa, and offers a rather different take on the continually vexatious question of "race". Many thanks to Karen Press, Charlotte Imani, Jeremy Wightman, Vernon Joshua and all at BestRed (an imprint of HSRC Press, Cape Town), and to Eric Miyeni, Darren Taylor and all others who supported me!

The Contents are as follows:

Chapter 3: Death and the Mielieboer
- Durban, 1997-1998 (my story on the drive-by shooting of black stevedores outs the suspects)
- Bloemfontein, 2003 (I interview neo-Nazis accused of plotting to bomb the Gariep Dam)
- Ventersdorp, 2010 (the Eugene Terre’Blanche murder and the demise of the AWB)
- Modimolle, 2007 (Boeremag support at the site of a former British Concentration Camp)
- Pretoria High Court, 2013 (judge hands down long sentences for high treason to Boeremag)
Chapter 4: Of Tribes and Turf
- Umvoti River Valley, 1996 (interrogating “faction fighting” in this heavily-armed rural area)
- Port St Johns, 1997 (toll road plan foretells battles over interpretations of tribal & state land)
- Excelsior, 2007 (revisiting the persistence of “race-shame” in this Free State town)
- Westdene, 2015 (I name attacks against foreigners both terrorism and genocide)
Chapter 5: Of Fear and Faith
- Lake Mzingazi, 1996 (I interview an Israelite sect member on the restoration of their land)
- Clermont, 1996 (inclusive monuments policy sees the refurbishment of a black Lutheran church)
- Tshitwi, 2000 (I visit a “witch village” of exiled vhaloi in remote rural Northern Province)
- Grahamstown, 2001 (I interview a young Satanist who admits to killing a kind little old lady)
Chapter 6: No-Man’s Land
- Kareedouw, 2001 (the persistence of Group Areas planning in small SA towns)
- Alexandra, 2005 (I investigate the dominance of “nimby” town planning in urban SA)

Chapter 7: Cold Stone Jug
- Johannesburg, 2002 (new prisons look like townhouses – but are designed to break up gangs)
- Krugersdorp Prison, 2005 (I interview the last surviving Stander Gang member, Allan Heyl)
- Johannesburg, 2014 (NICRO releases new stats on SA’s convicts by gender, race, sentence etc)
Chapter 8: Hewers of Wood and Drawers of Water
- Hammarsdale 1997 (chemical workers win great victory against Thor in international precedent)
- Piet Retief, 2000 (mothers work for R11/month in a union-busting, white-owned sawmill)
- Maandagshoek, 2002 (class action lawsuit against UK asbestos firm comes too late for the dying)
- Jagersfontein, 2005 (I investigate poor white Platteland poverty in the Free State)
- Mooi River, 2005 (interrogating the impact on the white-collars of blue-collar job losses)
- Carletonville, 2005 (I investigate the impact of the colour bar on the gold mines)
- Paternoster, 2015 (a fisherman tells me of his narrow escape at sea, and the loss of his friends)

Chapter 9: On the Red Dunes
- Cape Town & Witdraai, 2001 (a Bushman community tries to rebuild its devastated culture)
- Bushman's Nek, 1998 (Bushmen recruited in the Drakensberg as anti-poaching trackers)
- Paris, France, 2002 (the French Senate orders the returns of Sarah Baartman’s remains)
- Parys, SA, 2003 (“vanished” Bushmen still survive, living rough as migrant farm workers)
- Maun, Botswana, 2004 (243 Bushmen in class action against their removal from the Kalahari)
- Upington, 2012 (Dawid Kruiper dies and I recall interviewing him at his home on the dunes)
Chapter 10: A Dead Apricot Tree
- Rural KwaZulu-Natal, 1998 (I interview a mother who lost her child after a land eviction)
- Blydenfontein farm, East Griqualand, 2001 (the Gwiji family reclaim their old family farm)
- Rural Eastern Cape, 2001 (I interview the PAC's Clarence Makwetu on facing a land claim)
- Guba, 2001 (illegal coal miners dig 200m along a coal seam at Jerry's Mine to earn a living)
- Elandskloof, 2002 (revisiting the first land claim, in this fruit-farming district, six years on)
Chapter 11: The Kite-Maker’s Dream
- Kliptown, 2003 (revisiting the community's century-long struggle against forced removals)
- Fietas, 2003 (the community's attempt to restore itself after forced removals in the 1950s)

Chapter 12: A Children’s Martyrology
- Donnybrook, 1994 (I interview a girl, her mother killed and raped by a serial killer, lies nearby)
- Alexandra, 2002 (children suffer from diseases of extreme poverty on Sandton’s doorstep)
- Louisvaleweg, 2005 (revisiting the damage done by the Baby Tshepang gang-rape trial)
- Motsoaledi Squatter Camp, 2004 (I listen to shackland youths discussing whether to vote)
Chapter 13: Gender Benders
- Durban, 1995 & 1996 (I interview women escorts and male street-walkers about their prospects)
- Cape Town, 1999 (I interview the lesbian parents of the famous “spice-bottle babies”)
- Tempe Miltary Base, 2001 (women tank & armoured car commanders speak about combat)

Part 5: The Rainbow in Blood and Myth

Chapter 14: Collective Bargaining by Riot
- Muldersdrift 2004 (Alliance tries to heal the rift between itself and the social movements)
- Golden Highway, 2007 (I recall working in townships along the protest-ridden “highway to Hell”)
Chapter 15: Red in Tooth and Claw?
- Johannesburg, 2014 (CGT International Secretary asks me to write about NUMSA’s defection)
- Boksburg, 2015 (debate over forming a revolutionary party dominates NUMSA conference)
Chapter 16: The Cult of the Sacred Zombie
- Port Elizabeth, 2001 (Eastern Cape Premier introduces me to Nelson Mandela)
- Johannesburg, 2013 (writing Mandela’s obit, assessing his presidency and his “sainthood”)
- Johannesburg, 2015 (Born Free author Malaika wa Azania on how she wasn’t freed by Mandela)

Epilogue: Of Soil and Stars
- Johannesburg 2015 (I reflect on the nature of our freedom as the New SA comes of age)

Posted by Michael Schmidt at 01:48