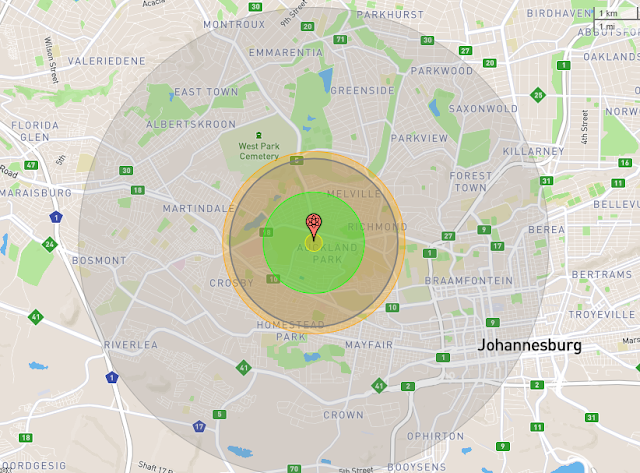 Simulation of an 18 kiloton air-detonated nuclear blast over the SABC in Auckland Park, Johannesburg. The light grey outer circle (more than 80 square kilometres) is moderate blast damage, the inner orange and purple rings are the almost coterminous fireball and thermal radiation radii (anything within this area would be vapourised instantly), while the green circle is the 500 rem radiation radius. Image courtesy of Nukemap (c) Alex Wellerstein

At the macro-strategic end of the apartheid state’s Total Strategy scale on which small-teams reconnaissance operations sat at the micro-tactical end, the ultra-secret Project Chalet of the South African Defence Force (SADF) achieved a major milestone in November 1979 by producing the pariah state’s first operational nuclear weapon. The first demo model, a cumbersome one-ton-plus device 2m long and 60cm in diameter, designed not to go critical but merely demonstrate the precision of its electro-mechanical components, had been produced under Project Kerktoring (Church-tower) in 1977 by Centre for Scientific and Industrial Research (CSIR) and Atomic Energy Corporation (AEC) scientists. An underground “cold,” non-explosive, test had been scrapped in August that year after the test site at Vastrap in the northern Cape had been spotted by a Soviet spy satellite and US spy plane. On 31 October 1978, Prime Minister P.W. Botha ordered Kerktoring transferred to exclusive military control and renamed Project Chalet. According to former AEC nuclear physicist Nic von Weilligh (1) who had worked on Project Chalet, starting in 1979, a “300 series” eventually developed into five pre-production models – two of which were of such high quality that one, 305, was retained as a training device called Hobo, after its warhead was removed.
The famous telltale double-flash of a nuclear detonation over South Africa’s south Atlantic Prince Edward Islands possessions detected by the US Vela satellite at 42 seconds past 4.53am on 22 September 1979 appears by all of the scientific data and coinciding evidence to have been a secret 3-kiloton Israeli nuclear test, with the SADF as a mere facilitating and keenly-observing partner. The scientific evidence includes: the signature double-flash light-intensity reading of the bhangmeters on board Vela 6911 – one of a series of Vela satellites monitoring compliance with the Limited Test Ban Treaty; the detection by the radio-astronomy observatory at Arecibo in Puerto Rico at the same time as the twin flash of an anomalous ionospheric wave consistent with a nuclear detonation, a finding that aligns neatly with seismic data from New Zealand and ocean wave and hydro-acoustic data analysed by the US Naval Research Laboratory; plus the low levels of iodine-131, a short-lived radioactive product of nuclear fission, found shortly afterwards in sheep in the states of Victoria and Tasmania, downwind of the incident site.
Respected investigative journalist Seymour Hersh (2) had claimed that according to Israeli officials, the Vela incident was the third joint Israeli-South African test in the South Atlantic; Hersh wrote that the actual warhead tested was a low-yield artillery shell, in other words, a miniaturised, tactical battlefield nuke; Israel’s initial nuclear tests are believed to have been conducted in the Algerian desert under French cover and supervision: Israel is believed to have first observed French tests in southern Algeria from 1960 and to have conducted its own underground tests in the Negev Desert in 1963 and 1966, producing its first deliverable nuke by December 1966; by 1979, the CIA believed it possessed between 10 to 20 warheads. A French foreign policy shift three days before the Six-Day War in 1967 closed the door of French collaboration to them; as a nuclear-collaborative state that supplied it with uranium, apartheid South Africa was the obvious option.  Soviet spy Dieter Gerhardt – who had served as a commander in the SA Navy before being exposed and arrested for high treason – claimed in a 1994 interview: ‘“I learned unofficially that the flash was produced by an Israeli-South African test, code-named Operation Phoenix.” (3)
There are two options for how the weapon was tested: either the warhead was fired on an Israeli Jericho II two-stage ballistic missile from the Overberg Test Range in the southern Cape downrange towards an aerial detonation point near the target islands, or, as suggested by Leonard Weiss of the Centre for International Security and Cooperation at Stanford University in the USA, (4) it was placed on a heavy barge sited off the Prince Edward Islands. Weiss notes that an SA Navy task force was conducting still-classified secret manoeuvures in the relevant period, which would support either delivery option. Wiess cites H.T. Hawkins, Senior Scientist Global Security at the Los Alamos laboratories in the USA, as recalling having shown Vela 6911’s bhangmeter readout to the instrument’s developer Herman Hoerlin. Without hesitation and without knowing the source of the reading, Hoerlin pronounced: “No doubt about it: an atmospheric nuclear explosion, several kilotons in yield, probably surrounded by lots of mass like a barge or the likes of it.” 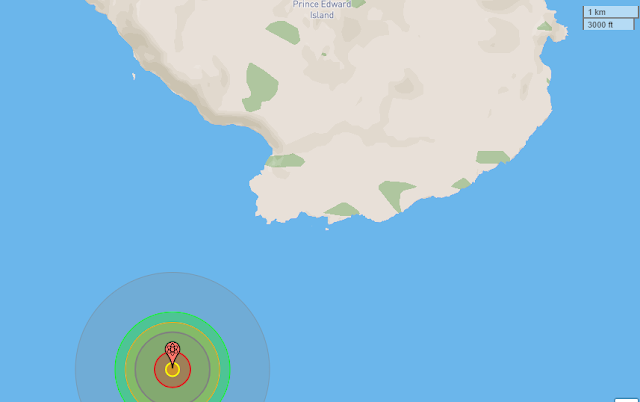 The Vela Incident? Comparative simulation of a 3 kiloton surface blast (on a heavy barge) at the Prince Edward Islands in 1979. Image courtesy of Nukemap (c) Alex Wellerstein.

Von Weilligh states that after the Vela incident, an SADF production series of true, deliverable nuclear weapons started with the completion in November 1979 of Video – later renamed Melba and used as a demo model – plus Cabot, number 306, which was upgraded into an active device. Hobo’s warhead was integrated into the first production model called Cabot in December 1982 – “a Christmas gift for PW Botha.” The naming of the nukes is quirky: Hobo is common military slang for “homing bomb,” while Cabot may have been named after Vienese explorer Zuan Chabotto (John Cabot in its Anglicised form) who discovered the east coast of North America in 1497, which as Botha’s “gift” nuke could indicate a deliberate celebration of European colonialism; on the other hand, Melba may be a crude joke, the device being intended to “toast” its target to a crisp.
Thereafter, the “500 series” of live nukes produced between 1988 and 1989 gave a total of six operational fission weapons with yields of 10 to 18 kilotons. The fissible yield of the nuke that levelled Hiroshima was measured at 12,5 kilotons.(5) The SADF’s nukes were, however, designed as a deterrent and not for actual combat use: the initial strategy was to secretly reveal their existence to key Cold War powers (the USA and Russia especially), and if that failed, to conduct a cold test, then a hot test (live test detonation) in an escalating battle of wills to force USSR-backed forces in Angola to withdraw. This would later change to a more aggressive stance.
The SADF nukes were soon stored – noses separate to tails as a safety precaution – in heavy-doored vaults at Advena, a nondescript facility tucked away off the road between south of the Hartebeespoort Dam. Five of them were designed to be dropped from a specially modified SAAF Bucaneer bomber, or fired from a mobile artillery platform, while the last was intended to be launched from an SA-manufactured version of the Jericho II that was thinly disguised as the RSA-2 satellite launch rocket, with a range capable of threatening all hostile Frontline State capitals and ANC/MK and SWAPO exile training camps with utter annihilation. (6) The battle for the maintenance of white supremacy at the continent’s southern tip was entering by far its hottest phase.
In November 1986, a new nuclear weapons deterrence strategy was approved by Defence Minister Magnus Malan and President P.W. Botha that called for one demonstration model, three gun-type nuclear weapons (a design with a plutonium projectile fired into a highly enriched uranium 235 core to precipitate the fission chain-reaction) that could be delivered by ballistic missiles, and three versions “boosted” with tritium to attain a yield five times larger that would be delivered by medium-range missiles, plus another seven weapons which could be delivered by aircraft. And a massive new facility was planned to produce weapons-grade plutonium and other heavy metals – aiming at an eventual thermonuclear fusion bomb with a yield of around 100 kilotons that would be delivered by intermediate-range ballistic missile by the mid 1990s. But in the 1986 strategy’s worst-case scenario, of South Africa facing a losing war in Angola, the nukes would have not been used strategically against enemy capitals like Luanda, but rather tactically in support of naval and ground forces. This was nevertheless a ratcheting-up of the tension on the previous strategy which had called for a gradual revelation, then mere test demonstration, of SA’s nuclear weapons capacity in order to force Russian-backed forces including the MPLA, SWAPO, and the ANC to step down. 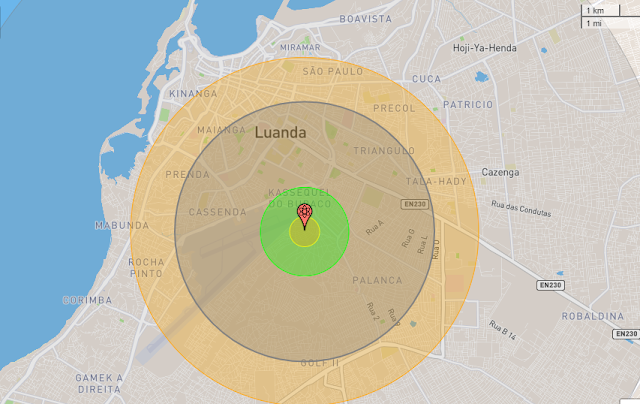 Notes:
1) Nic von Weilligh and Lydia von Weilligh-Steyn, The Bomb: South Africa’s Nuclear Weapons Programme, Litera Publications, Pretoria, South Africa, 2015.
2) Seymour Hirsch, The Samson Option: Israel’s Nuclear Arsenal and American Foreign Policy, Random House, New York City, USA, 1991.
3) David Albright, South Africa and the Affordable Bomb, Bulletin of the Atomic Scientists, Taylor and Francis, Abingdon, UK, July/August 1994.
4) Leonard Weiss, The Vela Event of 1979 (or the Israeli Nuclear Test of 1979, presentation at a conference entitled The Historical Dimensions of South Africa’s Nuclear Weapons Programme, near Pretoria, South Africa, 10 December 2012, online here
5) By far the most superior telling of the developments in nuclear physics leading to the only use of nukes in warfare is Richard Rhodes, The Making of the Atomic Bomb, Penguin Books, London, UK, 1988. The Hiroshima yield is his figure (the bomb being of the same gun-design as that used many decades later in SA); he gave a yield of 22 kilotons for the Nagasaki implosion-design bomb.
6) The slowly unraveling revelations of Projects Kerktoring and Chalet over a period of years are examined in my book Drinking with Ghosts (2014), and were added to by von Weilligh and von Weilligh-Steyn (2015).