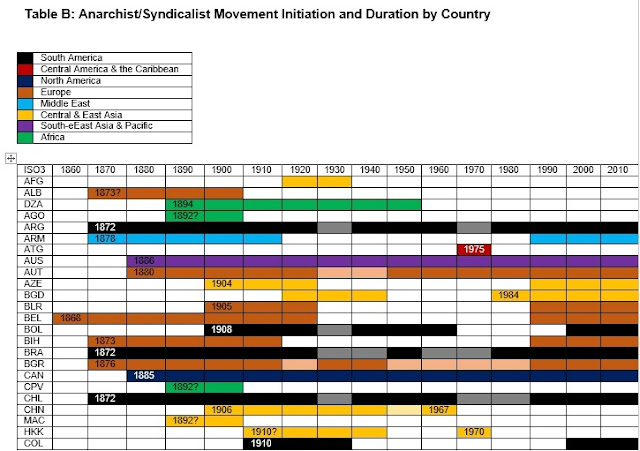 Above is part of a "periodic table" of the movement that I drew up to indicate when the movement arose (initial dates), suffered repression (pale-coloured blocks), and disappeared if relevant (white blocks). At a glance, you should be able to see that in many countries / territories, the 1930s-1980s were a bit of a dead zone - but also that other regions experienced organisational continuity, defeating the conventional anarchist historiography that claims the movement died on the barricades of Barcelona in 1939. For one thing, the Far Eastern and Latin American movements in particular survived WWII pretty much intact and in fighting spirit, while those in Europe had been devastated by Nazi-Fascism and had to rebuild from scratch. In its full extent, this table has helped me get a bird's eye view of the evolution of the movement internationally so I will probably get it replicated in the book itself to likewise assist my readers' understanding.

Factions in the Spanish Revolution 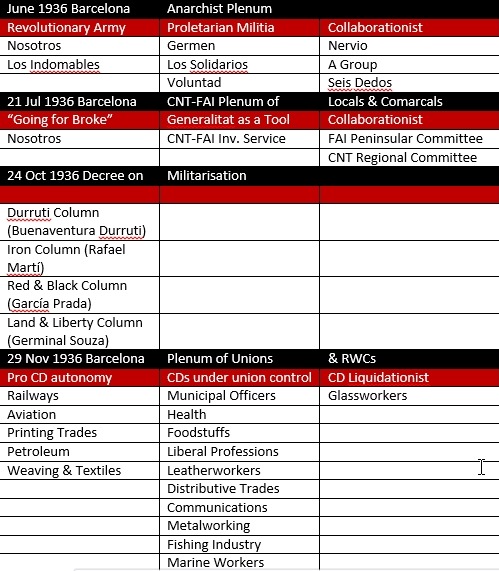 Because my forthcoming thousand-plus-page magnum opus, In the Shadow of a Hurricane, is an organisational-ideological history of the anarchist movement rather than a romantic narrative, I have had to try and navigate the complex Spanish labyrinth. I am currently doing a comprehensive rewrite of the Spanish Revolution and its aftermath, and four indispensable sources have proven to be Stuart Christie, We! The Anarchists: A Study of the Iberian Anarchist Federation (FAI) 1927-1937, The Meltzer Press / Jura Media, UK / Australia, 2000, Augustín Guillamón, Ready for Revolution: the CNT Defence Committees in Barcelona 1933-1938, AK Press / Kate Sharpely Library, UK, 2014, and Augustín Guillamón, The Friends of Durruti Group: 1937-1939, AK Press, UK, 1996, on the preparatory period and the Revolution itself, and Chris Ealham, Living Anarchism: José Peirats and the Spanish Anarcho-Syndicalist Movement, AK Press, UK, 2015, on the exile Spanish Libertarian Movement.

Assisted by these works and as a guide to my rewrite, I have drawn up a lengthy table (first page above) to chart how the various anarchist factions evolved during the Revolution and afterwards, based on their relative positions at various congresses, plenums etc.In part this helps track the exceptionally damaging and in fact counter-revolutionary position taken by the CNT and FAI leadership which destroyed the Revolution from within and which so poisoned the atmosphere of the post-Revolution exile movement. Hagiographers of the FAI be warned - I am following these excellent historians in damning the FAI at higher committee level as an actively counter-revolutionary organisation which by 1937 was degenerating into a conventional bourgeois political party while naturally commending the honourable resistance of revolutionary anarchist groups within and outside the FAI. But my preliminary conclusion at this point appears pretty bleak: that even the Friends of Durruti signally failed in their revolutionary task to root out - by shooting if necessary - the traitorous CNT-FAI leadership and to consolidate the revolutionary proletarian forces. All of which is pretty much why I far prefer the intransigent Makhnovists! 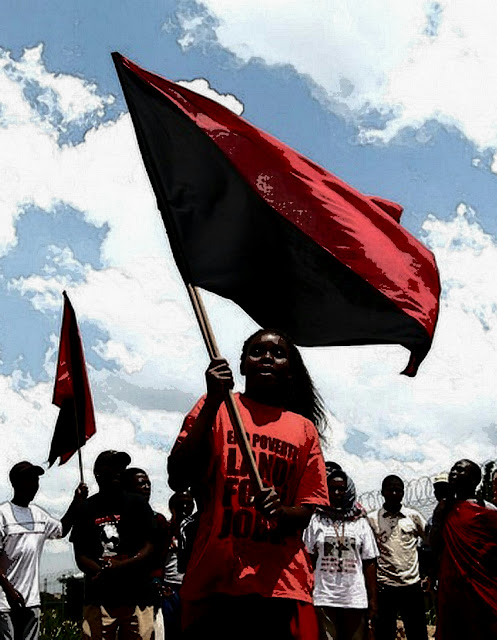 I have just completed a new 15,600-word monograph, African Anarchist Movements: Race, Class and Liberation, which provides a comparative analysis between the anarchist / syndicalist movements in early 20th Century Egypt and South Africa, then briefly sketches the movements in nearby Tunisia and Mozambique before detailing the post-war movement in Morocco, Algeria and Tunisia with an emphasis on the Algerian Liberation War, and concluding with anarchist organisational perspectives from Senegal in the 1980s, from Nigeria in the 1990s, from Morocco in the 2000s, and from South Africa and Egypt in the 2010s, bringing this little study full circle. I am hoping this pamphlet will encourage further study into African anarchist / syndicalist movement history - especially regarding Senegal, Tunisia, Morocco, Angola and Zaire (DRC). I will be asking some leading liberation movement lights from Egypt, Morocco, Tunisia, and Algeria to provide introductory commentary and will then get it formally published in Sweden, with plans for Arabic and Berber translations - so stay tuned!

Here's a song I wrote in Dhaka, Bangladesh, today: while looking down from an 11th-floor cafe at the monsoon sweeping over the city, a half-naked young woman ran through the traffic, apparently very disturbed. I tried to imagine what had distressed her so... Meanwhile on another rooftop a girl and mother delighted in the rains: their saris soaked to the skin, they danced about and rearranged the pot-plants in their aerial nursery...Everywhere at some instant, the moment of one person's exaltation is the moment of someone else's apocalypse... 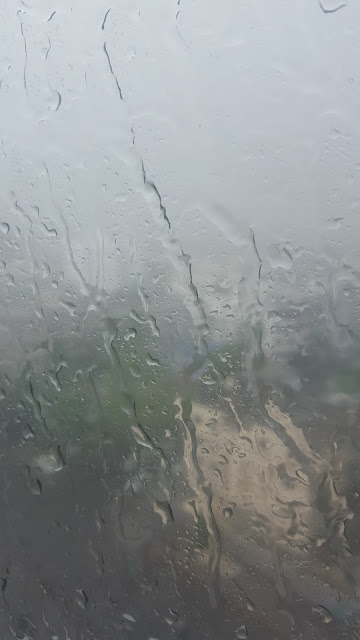 Posted by Michael Schmidt at 01:49