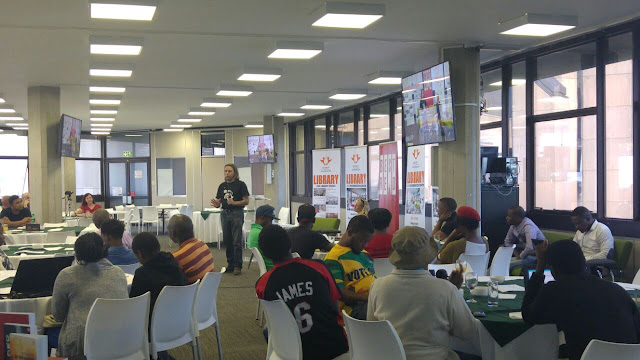 Continuity versus Change in Southern Africa’s Transition, official book launch of A Taste of Bitter Almonds to a capacity crowd in the library, University of Johannesburg, 12 April 2016

I used to be pretty shy - but over the past 21 years I developed the ability to speak comfortably in public and have delivered scores of lectures and presentations to audiences across the Americas, Europe, Africa, Asia and the Antipodes. These engagements have mostly centred on four - in my experience, linked - spheres: the safety and responsibilities of citizen-driven journalists working in transitional societies; the troubled histories of transitions to democracy in Southern Africa and elsewhere; human rights and the protection of vulnerable communities, migrants and persecuted creatives in unstable environments; and the grassroots, directly-democratic politics of anarchism. Here is a selected list of some of my talks, presentations and chairing sessions over the past two decades:

Class Struggle Without Borders: The Recolonisation of Africa and the Future of the Left, public lecture, at the invitation of the Socialist Caucus, University of Zambia, August 1998

Basic Anarchist Principles and How they Apply to the Social Movements (Based on the Brazilian Experience), BMC Red & Black Forum, Vlakfontein, 16 March 2003

On the Need for a Socially-Oriented Journalism, seminar with Aubrey Matshiqi & Anton Harber, University of Johannesburg, South Africa, 7 May 2008

Covering Elections in the SADC Region: Citizen-driven Journalism versus Political Spin in a Tough Media Environment, lecture at the Institute for the Advancement of Journalism / International Institute for Journalism Summer School for SADC Journalists, Johannesburg, 15 November 2010

Seismic Shifts: An Overview of Social Unrest in SA from 1994, Social Unrest & Safety Seminar, Institute for the Advancement of Journalism / International Committee of the Red Cross, Johannesburg, 3 May 2011

Oral Submission to the Press Freedom Commission, presentation to the PFC on behalf of the Professional Journalists’ Association of South Africa, Johannesburg, 30 January 2012.

In the Shadow of a Hurricane: Riding the Storms of Capitalist Crisis, presentation for Cartography of Revolutionary Anarchism book launch, Café Mexicho, Johannesburg, 9 November 2013.

After Mandela: The Implosion of ANC Alliance Politics?, public talk at the Museum of City and Sea, Wellington, New Zealand, 13 March 2014

In the Shadow of a Hurricane: How Anarchists Build Counter-power, presentation on IATH research and publications at the Philosophy Faculty, University of Ljubljana, hosted by the Federation of Anarchist Organisations, Ljubljana, Slovenia, 21 May 2014

Verité and Veracité, talk with Hamilton Wende after the screening of the Beate Arnestad documentary Seeking Truth at Arusha, Johannesburg Holocaust and Genocide Centre, 11 July 2016

UAVs over Africa, presentation on behalf of ProJourn and the Professional Society of Drone Journalists to the Conference on Emerging Technologies in Unmanned Aircraft Systems, Ekurhuleni, 17 November 2016