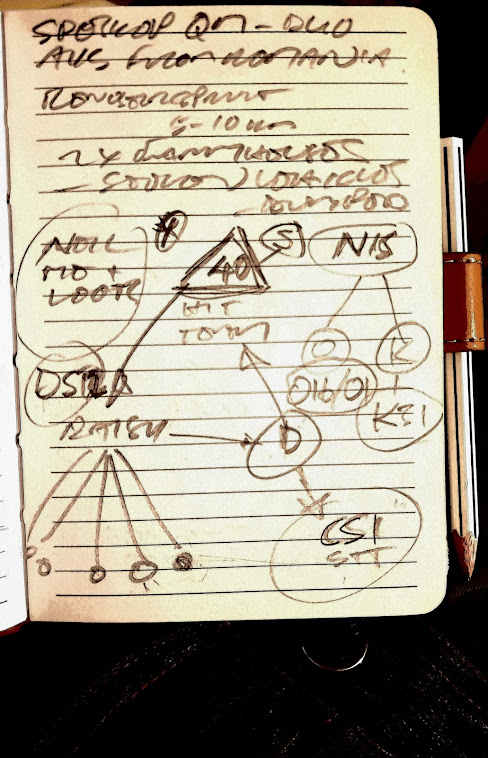 This is a page from my notebook on my face-to-face interview with Colonel Johan Theron, the Special Forces Headquarters Senior Staff Officer Counter-intelligence, who by his own uncontested account was personally responsible for just about all the hundreds of SADF "disappearances" by death flight over 1979-1987. Theron described the plainclothes Special Forces pseudo-operations unit, D40 (the Delta 40 symbol in my notebook, later renamed Barnacle) explicitly as a "Hit Team" reporting directly to Special Forces HQ ("S" for Speskop).

Meanwhile, complicating matters, the National Intelligence Service ("NIS") ran several entirely separate hit teams like O16/01 and K31. The asterisk highlights "Neil, me + Loots" as the three men party to the 1979 decision to get rid of "excess" POWs by murdering them and dumping their bodies in the ocean from a light aircraft: D40/Barnacle founding Officer Commanding Major Neil Kriel, Colonel Johan Theron, and Major-General Fritz Loots, founding General Officer Commanding Special Forces. This diagramme helped confirm this pseudo-operations ecosystem - and evolved into the diagramme below which was published in the book.

The other notes on the page refer to D40's right to draw down on the quartermaster (QM) stores at Speskop - despite being disguised as a "civilian" real estate, then security company, to the fact that many of its AK47s used in pseudo-operations were of Romanian origin, that its Rensosterspruit headquarters, consisting of two farmhouses, was 5-10km north of Lanseria Airport from whence most death flights by "civilian" Pier Seneca II originated, and the fact that the unit often used stolen civilian cars which were later dumped. My book, Death Flight: Apartheid's Secret Doctrine of Disappearance (Tafelberg, Cape Town, 2020), has been very well-received in both legal, journalistic, academic, and ex-military circles and is already well on it's way to bestseller status. 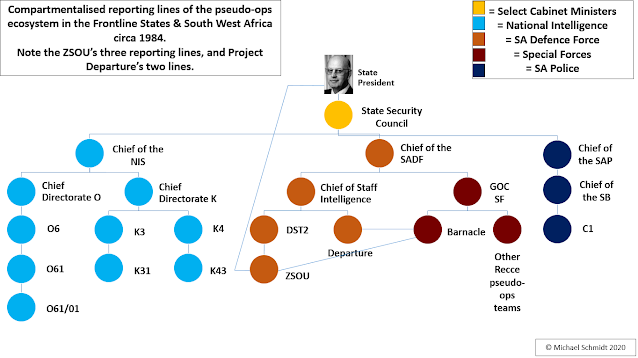 Posted by Michael Schmidt at 03:16