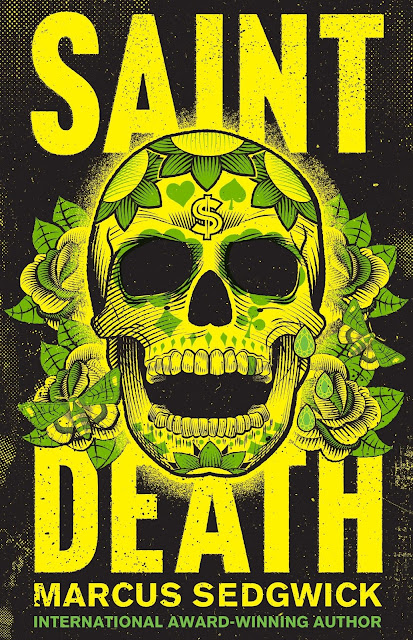 According to a recent Vice documentary, the cult of Santa Muerte, Holy Death or Saint Death, beloved of narco-terrorists and their victims, is the fastest-growing religion in the world. Attracted by the book's lurid acid-yellow cover, I was soon drawn by Sedgwick into the borderlands of shacks around the murderous Cuidad Juárez, Chihuahua, and the parasitic US twin it serves, El Paso, Texas, a place where he almost has the reader believe, ancient clawed gods roil just beneath the desert floor and smack their reptilian lips in anticipation of the latest blood sacrifice produced by the narco cartels who disappear hundreds of women, grievously torture those who cross them, and grease the wheels of the Yanqui cocaine / maquiladora / coyote machinery.
Over a critical night and day, we meet Arturo, a bone-poor Chicano who re-encounters his childhood friend Faustino, who disappeared a year previously. A Guatemalan migrant with dreams of making it to El Norte, Faustino has made his own pact with the narco devils and the collection date in imminent; in desperation, he turns to Aurturo to save him – and enable his girlfriend Eva and newborn baby to pay the coyotes to smuggle them into the US.
As Arturo's dark fate unravels, he staggers towards a hard-won ethical illumination. Underpinned by an anti-capitalist sensibility that defines the narco-wars and the cocaine / maquiladora / coyote system as coterminous evils, but which never overwhelms the visceral nature of the plot and its naked 80-watt bulb descriptions of descent, we are presented with a modern danse macabre of Faust and Mephistopheles.
Yet Sedgwick's Faustino is a signifier of the world's poor, while his ever-present demonic Santa Muerte is merely the inescapable logic of our decisions as a species to abrogate our pact of brotherhood. And the twist in his tale is the possible, but questionable, salvation offered by Arturo, in trying to discover his Arthurian nobility through self-sacrifice in a distinctly Mexican denouement that is pitiless yet which retains a certain bloody beauty. Well worth the read.

The Ascent of Ancient to Modern African Trade Routes 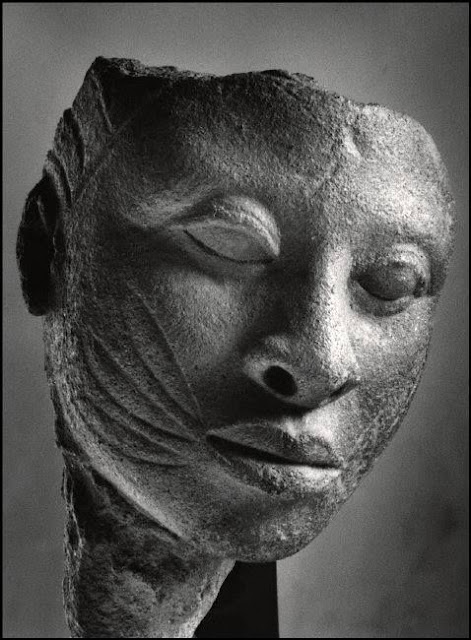 At a fascinating talk on the meaning of the decolonisation of knowledge, delivered by Prof Kwesi Kwaa Prah of the Centre for Advanced Studies of African Society at the Academy of Science of South Africa's Humanities Book Award last Thursday (he stressed that culture not colour was the determining factor in recouperating Africa's intellectual heritage), I was reminded of this piece I wrote, an extract of the article From Wagadu to Guangzhou published in the pan-African journal Ogojiii, Issue No.2, 2015. My books Drinking With Ghosts and A Taste of Bitter Almonds were long-listed for the prize, which was deservedly won by Prof Keith Breckenridge for his decade-in-the-making book Biometric State: The Global Politics of Identification and Surveillance in South Africa, 1850 to the Present.

In plying her trade in technology solutions to countries such as Ghana, South African mobile commerce entrepreneur Thabiso Moerane is retracing – in cyberspace – some of the most ancient African trade routes that usually conjure romantic images of camel caravans crossing the Sahara. Today, as countries such as Mauritius and Kenya position themselves as hyper-tech service and creative hubs, intra-African trade and the continent’s trade abroad has moved rapidly to embrace Fifth-Wave innovation.

The most ancient trade routes were those that hugged the Mediterranean coast or followed the course of Africa’s great waterways, in particular the Great Lakes and the Nile, Congo, Niger, Zambezi and Limpopo Rivers. It is commonly held that it was the Amazigh, the Berbers who are a Maghreb people of mixed Arab, African, Phoenician and Gothic descent, were the first to take camel trains across the wastes of the Sahara south to trade with West African miners for their much-prized gold, copper and salt – though the ancient Egyptians and Nubians probably secured these materials via a more southerly route, abandoned by the 9th Century CE, that ran from Kharga to the west of the Nile to Takedda (today Azelik in Niger, an important uranium-mining centre) to what is today Gao on the Niger River, and beyond.

Arab sea-traders in their dhows did not venture past the Moroccan coast, but an intrepid Libyan named Hanno the Navigator – after whom a lunar crater is named – was the first to map the west coast of Africa on a remarkable 5th or 6th Century BCE sea voyage with a fleet of 60 ships in pursuit of Carthaginian attempts to control the “Guinean” gold trade that certainly took him as far as Senegal. According to some modern historians this might have been much further, to within sight of the volcano of Mount Cameroon (Hanno likely fudged the details to protect his route from Greek and Roman competitors).

In the ancient souks and oases, barter was dominant and remained so well into the Medieval period. Exchange currency was gradually introduced, from the cowrie shells that remained legal tender into the 19th Century in kingdoms as diverse as Mali and Kongo, through the X-shaped copper “Katanga cross” currency of Kongo, to the wearable manila bronze and copper bracelet money of West Africa, and finally the minted gold coins of the Axumite Empire which once controlled both coasts of the Red Sea, its currency circulating as far afield as Asia and Europe from 270 CE until the empire’s decline in the 7th Century CE.

Axum traded spices, ivory, ebony and animal shells with Egypt, Greece, Rome and as far away as Persia and India, and imported textiles, precious metal objects, wine and olive oil, while far to the south, the Karanga of Great Zimbabwe, who were traders, sailors and builders of granite cities in the period 1000 to 1600, traded the gold they fashioned for glass and porcelain from as far away as China.

The smelting of iron – which not only provided superior Iron Age tools but which formed the basis of the later rise of Medieval African kingdoms using iron and later steel weaponry – may date to as early as 3000 BCE in Central Africa, which if true, puts it centuries ahead of iron-working anywhere else in the world. In addition, north-western Tanzania boasts a site that shows one of the first examples of carbon steel smelting, dating back 2000 years, while the Xhosa of the Eastern Cape were smelting iron at least a century before the Japanese. 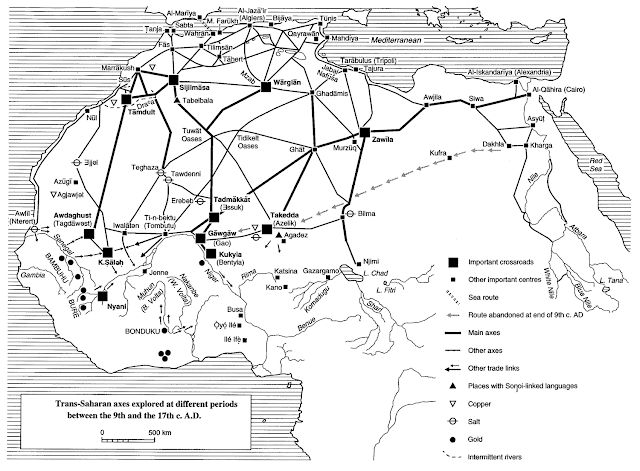 Trans-Saharan trade routes between the 9th and 17th Centuries

The rise over their stone and bronze-armed neighbours of kingdoms whose soldiers, both standing armies and levies, were armed with iron and steel enabled the control and taxation of Medieval camel trains, not only bearing gold and salt, but increasingly also ivory, incense, kola nuts, indigo dye, kente cloth and a smorgasbord of African products, and the counter-trade in Asian silk (from which kente cloth was made), glass, ceramics, precious stones and spices. Today, that great cycle continues, driven by the likes of businessman Perious Mundia whose Zambian company designs smartphones which are built and sold in China.

The Empire of Wagadu (Ghana, 300 CE - 1100) established control over the gold and salt trade by the use of iron arms, while the rise of its successor Empire of Mali can be dated to the Battle of Kirina in 1235 at which the forces of Mandinka warrior chief Sundiata defeated the Kaniaga tyrant Samanguru whose rule had been an inefficient combination of heavy taxes on the Mandinka and an inability to control the lucrative trade routes through the Sahel.

Both might and trade made Sundiata’s grandson King Musa I (c. 1280 – c. 1337) the wealthiest man in history (his inflation-adjusted net worth was about US$400-billion compared to John D. Rockefeller’s US$340-billion) and his empire expanded to include vital trade hubs and centres of learning such as Timbuktu just north of the Niger River. Trade also transmitted ideas, ideologies and customs, so just as the Amazigh brought the Arabic language, Islamic religion and shariah law to West Africa, so the Axumites brought Christianity and its cultural and legal values inland into Ethiopia.

Pliny the Elder claimed that Hanno had made it all the way around the Cape to Arabia, but this is dubious. When Henry the Navigator of Portugal died in 1460, his fleets had only reached as far as the Canary Islands, and 28 years later, Bartolomeu Dias proved it was possible to round the Cape – yet the oldest proven chart of the entire African coastline is to be found on a Chinese Ming dynasty map produced in about 1390. The Chinese circumnavigation of the world a century before Magellan brought elephants, ostriches, leopards, giraffe and parrots to China.

When the Portuguese traded with the Empire of Benin in the 12th to 15th Centuries, they acknowledged a sophisticated African polity that was the equal of any in Europe, with a university, a standing army, a dedicated and literate bureaucracy, defensive ramparts that in their 16,000km extent were four times longer than the Great Wall of China using a hundred times the material of the Great Pyramid of Cheops, and great art such as the Yoruba works called the “Ife Sculptures” of c. 1300 that were unsurpassed globally in their skill.

But trade turned brutal with the dawn of the Trans-Atlantic Slave Trade of the 16th to 19th Centuries that saw European ships trading weapons, ammunition, alcohol, and textiles in exchange for captives taken in inter-kingdom wars or inter-tribal raids. Finally, the terrible advent from 1885 of the Maafa (“Disaster” in Kiswahili), the scramble for Africa, saw the last of the African empires, all but Ethiopia, destroyed, with a British task force burning and looting Benin City of its artworks in 1897. The colonial era did see the building of African railroads, but as their footprint today more than a century later makes plain, they were primarily designed to strip the continent of its raw produce and minerals and ship them straight out of the ports to Europe. 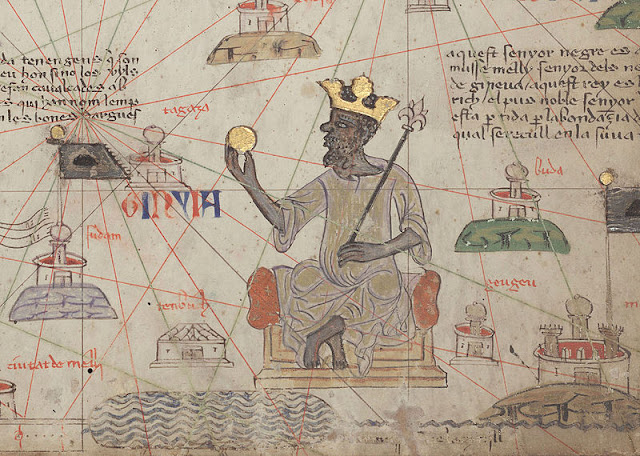 King Musa I of Mali, depicted here in a Catalan atlas

The Heart of a Gun 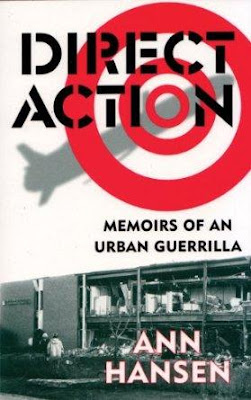 A review of Ann Hansen, Direct Action: Memoirs of an Urban Guerrilla

* A CBC documentary on Direct Action is here.