A Taste of Bitter Almonds by Michael Schmidt: http://pensouthafrica.co.za/a-taste-of-bitter-almonds-by-michael-schmidt/ 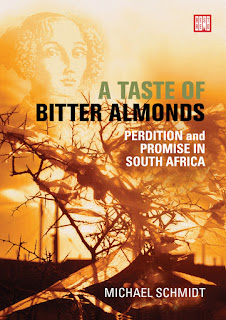 When Nelson Mandela took the oath as South Africa’s first democratically-elected president in 1994, it symbolised the triumphal defeat of almost three and a half centuries of racial separation since the original corporate raiders of the Dutch East India Company planted a bitter almond hedge to keep indigenous people out of ‘their’ Cape outpost in 1659.
The subsequent expansion of Dutch, Batavian, then British settler colonialism over the territories that centuries later were forced by Britain to form a sub-imperialist corporate entity called ‘South Africa’ has usually been retro-projected as a simplistic tale of white-over-black – but this ignores the multiracial nature of both the colonial elite and its underclass of servants, soldiers and slaves. The dispossession by genocide at the hands of Boer, British, Bantu and Griqua of the indigenous Bushmen – a term they themselves prefer to the pejorative ‘San,’ meaning vagrant – has been airbrushed out of the South African consciousness, as has the certain knowledge that all South Africans, including the author, are racially interrelated, creating blind spots that were viciously exploited by white, and now increasingly, black racist nationalists with the rise since 2014 of right-wing populism.
The Mandela moment had deep global resonance and for a few years thereafter the ‘Rainbow Nation’ was the world’s darling with the stories produced by journalists signalling in a breathless flood the dramatic changes of the transition – but in the world’s most unequal society, for the majority of its people, being excluded from a dignified life remained the rule over 1994 to 2015, and a taste of bitter almonds remained. Some of the most obvious – yet usually ignored – elements of continuity from the colonial, dominion and apartheid past in the democratic era include the intolerable official burdening of all young children by insisting on classifying them by race, the cynical unwillingness of the political elite to adequately redistribute to the hard-toiling poor the ill-gotten gains of the past especially land and corporate wealth, and the weird mimicking by today’s town planners of separatist apartheid urban geography.
In the year of South Africa’s troubled coming-of-age, veteran investigative journalist and anarchist activist Michael Schmidt brings to bear 21 years of his scribbled field notes to weave a tapestry, employing veteran war correspondent Martha Gellhorn’s ‘view from the ground’ technique: here in the demi-monde of our transition from autocracy to democracy, in the half-light glow of the rusted rainbow, you will meet neo-Nazis and the newly dispossessed, Boers and Bushmen, black illegal coal miners and a bank robber, witches and wastrels, love children and land claimants.
About the author
Michael Schmidt is a field reporter with 26 years’ experience, having worked for 19 years at South Africa’s leading print titles including ThisDay and Sunday Times before going into journalism training in 2008. He has worked across Africa, Central and South America, the Middle East and elsewhere. He has an interest in extra-parliamentary politics, free media activism, and conflict reporting in transitional societies. He is the author of four non-fiction books including Drinking with Ghosts: The Aftermath of Apartheid’s Dirty War (BestRed, South Africa, 2014), and has been published in Germany (2008, 2010), the USA (2009, 2013), Brazil (2009, 2014, 2015), Canada (2012) and Argentina (2015). He is currently working on six more books, and a multimedia project on massacre and memory, with Lebanese writer Rasha Salti.
Date of Publication: November 2015
ISBN: 9781928246060
Website: drinkingwithghosts.blogspot.co.za
Publisher: BestRed
Posted by Michael Schmidt at 06:56