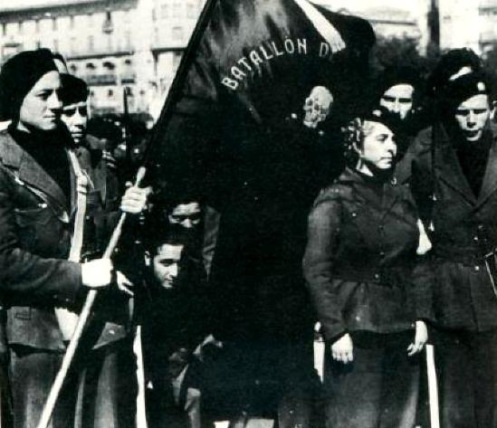 Members of the Malatesta Battalion of Italian anti-fascist volunteers who fought Franco's forces in the Spanish Revolution.

In 1936, the outbreak of the Spanish Revolution saw perhaps 40,000 international volunteers flock to Spain. There was no internet, cellphone or email communication and travel to the Revolutionary free zone was exceptionally hazardous, and yet they flooded in. Some 250 (later rising to 400) foreigners such as the Algerian anarchist Saïl Mohamed, German IWW veteran Heinrich Bortz and Canadian IWW veteran Louis Rosenberg were organised into an International Group of the Durruti Column, under Louis Berthomieu, which had as its training base the former Pedralbes Barracks, which was renamed the Miguel Bakunin Barracks, and comprised the Sacco and Vanzetti Century (English-speaking), the Erich Mühsam Century (German-speaking), the Sébastien Faure Century (French- and Italian-speaking), and the Matteotti Battalion (Italian-speaking).

Meanwhile, several hundred Italians exiled in France – many of them former anti-fascist Arditi del Popolo militiawomen and militiamen (there was actually an office of the exiled USI in Barcelona at the CNT headquarters) – formed the Malatesta Battalion, nick-named the Battalion of Death, which initially started on the Huesca front under Camillo Berneri, but which went on to defend Basque Country, while other Italians were attached to the Justice and Liberty Century of the Ascaso Column, and after May 1937, Italians formed the 25th Ortiz Division within the Land and Liberty Column. About 40% of the XV International Brigade (incorrectly but popularly known as the Abraham Lincoln Brigade after one of its subsidiary battalions), though it had been organised by the Comintern, consisted of Wobblies and unaffiliated socialists from the USA. There were only four Wobblies and one anarchist volunteer in the Canadian Mackenzie-Papineau Battalion of the XV International Brigade.

The Spanish Revolution brought into sharp relief the question of revolutionary war: whether it was to be fought along conventional hierarchical military lines, or along unconventional horizontal militia lines. Crucially, this was not merely a question of strategy and tactics – though military historian Antony Beevor hailed the militia over the conventional military in Spain – but at its heart also of ideology, the motivating rationale for armed action, and the ethic which mobilises the masses. In the years since the Spanish Revolution’s defeat from within and because of its capitulation to militarisation and statism, and especially during the post-WWII era of national liberation struggles in Asia and Africa and leftist insurgencies in Latin America, the libertarian military option was largely forgotten, and the guerrillas of the 1950s-1980s largely learned their strategy, tactics and ideology from statists, whether Sun Tzu, Guevara, Mao, Giap or others – though the libertarian tendency, although occluded, was never entirely absent from anti-imperialist struggles in much of Latin America, and to a lesser extent, North Africa, North America, and Europe.

Fast-forward to the post-Soviet era, and the question of revolutionary war has come to the fore again, starting with the Zapatista insurgency in Chiapas in 1994, moving through the Arab Spring of the 2010s, and into the libertarian communist revolutionary experiment in Rojava (Western Kurdistan) today. Eight decades after the Spanish Revolution, we are witnessing the Rojava Revolution and the world's working people are connected as never before - and yet there seems to be a paucity of support for the revolutionary forces fighting the retro-fascist Daesh (Islamic State) terrorist organisation. It made sense that local anarchist organisations first took up the fight: Revolutionary Anarchist Action (DAF) and Social Rebellion (SI) in Turkey and Western Kurdistan. The insurrectionist SI fights alongside the International Freedom Battalion (EÖT), a formation of foreign leftist volunteers inspired by the International Brigades who fought fascism in the Spanish Revolution, but other anarchist formations have joined the struggle: the French-speaking Henri Krausucki Brigade (BHK), the Greek-speaking Revolutionary Union for Internationalist Solidarity (ESDA), and the English-speaking International Revolutionary People’s Guerrilla Forces (IRPGF).

Still, the response from the international anarchist movement to not only fighting fascism, but to defending the first significant social revolution since perhaps the true Iranian Revolution of 1978-1979 (not to be confused with the Khomeinist counter-revolution which succeeded it) is disappointing. Certainly, interviews with the anarchists fighting Daesh reveal that the fighters themselves are disdainful of the "armchair anarchists" who criticise those who have taken up arms. Resorting to armed struggle is not a decision to be taken lightly, but just as the struggle against apartheid - in which mass pacifist initiatives such as the Defiance Campaign of the 1950s were popularly successful while remaining largely toothless - a time comes when one has to resort to arms.

But today’s guerrillas, especially those who wish to establish a free society and not merely yet another repressive-exploitative state-capitalist formation, it is a vastly altered battlespace, with hunter-killer drones, cyberwar, intimate satellite imaging, non-lethal weaponry, biometric tracking, over-the-horizon strike capability, 3D-printed weapons, dirty bombs, and so forth. For post-Soviet libertarian communist revolutionaries, therefore, the question of revolutionary war in this new battlespace, or revolutionary neowar as I term it, is urgently framed by new technologies, new post-Soviet ideologies including Salafist terrorism and a revived libertarian communism – and a whirlwind of competing centrifugal hegemonic-imperialist and centripetal decentralist-proletarian forces.

And yet, this essentially asymmetrical war between the poles of what the autonomists Antonio Negri and Michael Hardt call “empire” and “multitude” or what the anarchist Felipe Corrêa calls simply “domination” and “self-management” has been trapped in resistance forms either shaped by a liberal incapacity to grasp the nettle of power (as in the Occupy movement that “occupies” nothing but pre-existing public space), by a naïve, self-incapacitating mass pacifism (as in the Egyptian Spring’s reliance on the theories of the likes of Gene Sharp), and by outmoded tried-and-failed forms of statist guerrilla warfare (in particular the foquismo of Ché Guevara, the militarism of Carlos Marighella, and the proto-state terrorism of the likes of the Red Army Fraction).

A clear question therefore needs to be asked of anarchists, libertarian communists, libertarian autonomists, and all free-associative, decentralist groups, networks and formations: how do we fight back today? How do we ensure that popular mass forces seize power – the ability to transform exploitative relations – and break it down into local directly-democratic, socially pluralistic administrative bodies, horizontally-federated in order to establish a durable libertarian counter-power? I will examine these issues in detail in two forthcoming books and one multimedia project. First the book Deepest Black: Defending the Anarchist Mass-Line (due to be published next year) will examine four historical case studies of mass anarchist movements that defended themselves by force of arms in Bulgaria, Ukraine, Manchuria and Uruguay. Next, the multimedia project The People Armed: Anarchist Fighters Verbatim (a work in progress) will feature in-depth unedited video interviews with anarchist combatants from across the world to be showcased online with text translations and stills portraits. And last, the book Navigating Battlespace: Revolutionary Anarchist Praxis (in planning) which will update Abraham Guillén’s Strategy of the Urban Guerrilla to produce a contemporary anarchist military praxis. 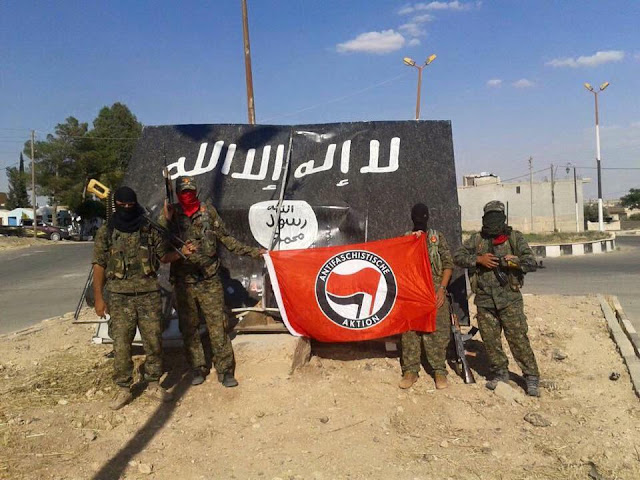 International Freedom Battalion militants pose with their anti-fascist flag in front of a Daesh banner after their liberation of Tel Abiyad from Daesh.