One of my most influential texts was a pamphlet Five Waves: a Brief Global History of Revolutionary Anarchist Communist Mass Organisational Theory & Practice, Zabalaza Books, Durban, South Africa, 2005, which was translated into many languages including Italian by the Federation of Anarchist Communists (FdCA) - see cover below - and into Greek by the Organisation of Anarchists of Greece (OAE). A defense of Bakunin's dual-organisationist tradition, what made it unique was not only its international perspective on the anarchist movement - including the Caribbean, Middle East, Africa, Central Asia and South-East Asia, regions just about never included in anarchist histories - but its periodisation of the history into five waves of militancy that not only showed there was a wave before the foundation of the influential French CGT in 1895, but that there were significant waves in the Far East, Latin America and Africa after the defeat of the Spanish CNT in 1939, and a survival up to the present day. The text was eventually expanded and published as a book, Cartographie de l'anarchisme revolutionnaire, Lux Editeur, Montreal, Canada, 2012. 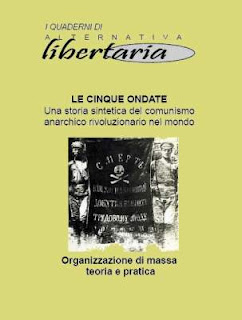 Now that I have completed an overhaul of that text with a significant expansion, particularly regarding new studies of the Manchurian Revolution, and the Uruguayan Revolt, I have been reviewing my periodisation and found that there was an unusual quarter-century cycle of roughly 26 years which consituted the waves, or at least that was true for the first, second, third and fifth waves; the odd one out was the fourth wave which ran for some 40 years, essentially covering the Cold War period. So I wondered if a natural end to the fourth wave might not be 26 years after the imposition of the "Maoist" dictatorship in China in 1949, with the death of Franco in 1975? That would give a "short" fifth wave of only 16 years until the dissolution of the Soviet Union in 1991, and then another 25-year (sixth) wave until the consolidation of the Rojava Revolution in 2016. I'm not sure if at this stage I will stick with five waves or introduce a sixth for the Spanish-language edition, but I will discuss this on other anarchist fora and post the results here.

Posted by Michael Schmidt at 00:52