Launches of A Taste of Bitter Almonds

The first two launches of A Taste of Bitter Almonds went off swimmingly. The first launch, a local community affair, was last Thursday night, 7 April 2016, at the Roving Bantu Kitchen in Brixton, Johannesburg. A mixed-income suburb in a state of dynamic transition, Brixton embraces poor and middle-class city dwellers from across Africa; it is one of those suburbs that truly has transformed ethnically and societally since the fall of apartheid; and remember - this was once the roost of the notorious SA Police Brixton Murder & Robbery Squad, which was feared for probably committing more murders than it solved, and after which the Afrikaans-language folk band Brixton Moord en Roof Orkes was named in irony.

This blurred and blended nature of Brixton is at odds with the maintenance - and extension - of municipal geographic apartheid past the demise of the hated Group Areas Act into today under allegedly "social democratic" ANC rule, a contradiction that I interrogate in both urban and platteland South Africa in the book. And the Roving Bantu Kitchen, run by former ANC exile Sifiso Ntuli - who had to skip the country in 1981 for being photographed by the press burning an apartheid flag on the Wits University campus - and his wife Ashley Heron (thanks for the great beans curry!), was the ideal venue to interrogate a society in transition.

Sifiso (wearing the anti-nazi t-shirt below) is an engaged and intelligent maverick who does not spare the rod for his parent party in its deviation from its founding ethics. He named his bar-restaurant-live venue, tongue-in-cheek after an aspersion cast at him by a PAC member when he first arrived in exile in Dar es Salaam: "Ah, you are one of those roving bantus who jumps from cloud to cloud."

The Kitchen is decorated with everything from kitsch 1970s Springbok LP covers and pages of Volksblad from the 1960s which feature weird adverts for black "maid's" uniforms (shown smiling, serving white folk), to posters of martyrs like MK's "Lion of Chiawelo" who was killed after holding off the police for hours in an epic firefight in Soweto in 1980 - the event that radicalised a young Sifiso - and a series of sombre drawings by SA-Israeli artist and jazz clarinetist Harold Rubin on the 1960 Sharpeville Massacre.

I spoke about conditions of exclusion in democratic South Africa - then threw open the floor to what became a lively debate between audience members of a range of colours and ages on the question of how our senses of identity as Africans are continually challenged and morphing. Thanks, Sifiso! 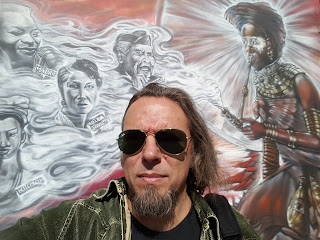 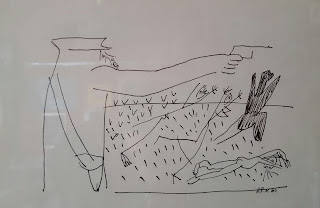 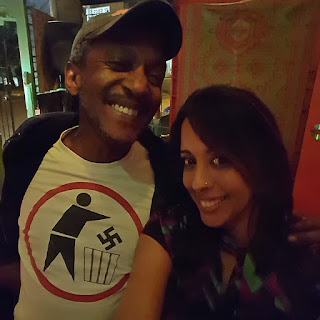 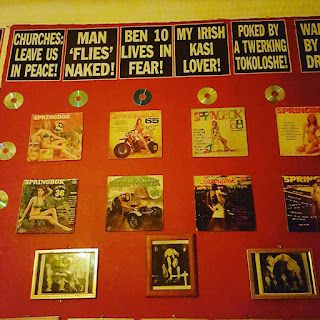 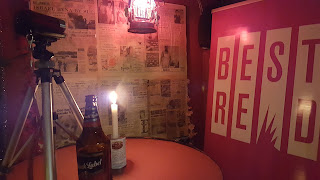 The second launch, the more official, academic one, was at the main Library of the University of Johannesburg this Tuesday, 12 April 2016, hosted by the brilliant Prof Ylva Rodny-Gumede, head of the department of Journalism, Film and Television. The book was billed by the Library as "a challenging new view from the ground on race and class that interrogates the continuities between apartheid's autocracy and today's troubled democracy in the world's most unequal society. The book's themes of identity, dispossession, and reclamation are grounded in the colonial era: examining the multiracial nature of settler colonisation and the First Nations Genocide sets the scene for an exploration of the maintenance of apartheid geography and conditions of exclusion under democracy, from zama-zama coal-miners and poor whites, to prostitutes and pogromists, witches and wastrels, lesbians and land claimants."

We had a full house of around 80 people, consisting of students (including members of the right-populist EFF), academics, journalists and other professionals. My talk was live-streamed (I will post the link shortly), and I spoke about the need to reinterrogate the dominant narrative of transition in South Africa with greater emphasis placed on structural, class and societal continuities, and also about how we as a people have an unfortunately ingrained need to sub-divide each other by ethnicity, creed, etc, when we are actually all related by blood and a shared culture, while the real divide is class (the EFF members walked out at this perhaps because it did not accord with their party's racialised, anti-class views).

The talk was otherwise well-received and the debate that followed was measured, nuanced, and intelligent. We sold copies of my books on journalism, A Taste of Bitter Almonds, and Drinking with Ghosts, as well as my books on anarchism, Cartography of Revolutionary Anarchism, and Black Flame - the latter being the new South African edition now that the first three US print-runs have sold out and the copyright has passed back to Lucien van der Walt and myself. 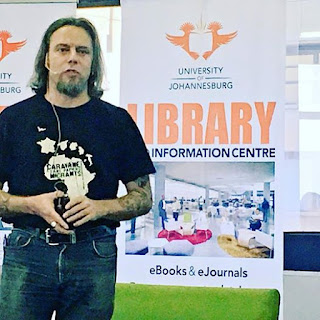 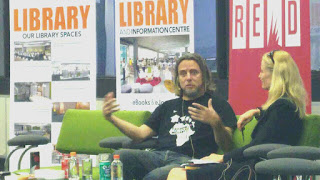 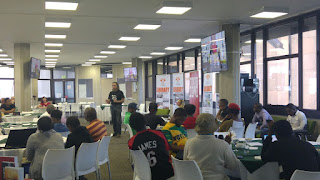 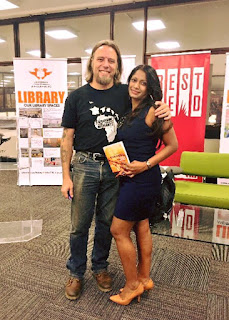 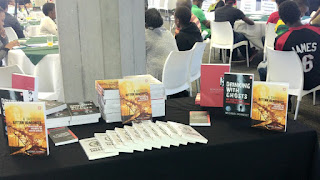 Posted by Michael Schmidt at 04:31