Progress on getting Johannesburg on board ICORN

Last week the Southern African Cities of Refuge Project was invited to present on its initiative at a two-day conference run by the Southern African Human Rights Defenders Network (SAHRDN), founded in 2013 as a result of an increasing trend in the region for governments to erode human rights by first attacking those who defend them. The scene-setting country presentations given on the first day, 4 July, by representatives from Angola, Botswana, the Democratic Republic of Congo, Lesotho, Malawi, Mozambique, Namibia, Swaziland, Zambia and Zimbabwe showed clearly that human rights abuses, while differing from country to country, remained a serious problem in the region.

I will write up a detailed report for the Project, but suffice to say that the conference, run in Johannesburg by OSISA, was an extremely valuable event. With simultaneous translation booths on hand, delegates were able to fluidly exchange views and best practice. Speaking for the Project to get Southern African cities, starting with Cape Town, Stellenbosch, Johannesburg, and Windhoek, aboard the International Cities of Refuge Network (ICORN) www.icorn.org, I introduced the Project. The Project was initiated by the Professional Journalists' Association of South Africa (ProJourn) and PEN South Africa in 2012, and I spoke of our confidence that the City of Cape Town would become the first ICORN City of Refuge for persecuted writers, journalists, musicians and artists.

I then used as a practical example of the pitfalls of such work, the emergency relocation to a country of refuge that ProJourn had just accomplished of a Zimbabwean human rights defender at serious risk of assassination by Zimbabwean Central Intelligence Organisation (CIO) agents (two of his colleagues were murdered in Pretoria so far this year and a third was forced to drink poison but narrowly survived, having been found in a coma by his landlord). The World Organisation Against Torture (OMCT) provided the funds for the emergency relocation. The challenges were many, serious, and nerve-wracking but the human rights defender is now safe in his new country of exile.

On the second day, I availed my typing skills to take the minutes of the breakaway group examining the very difficult task of fund-raising around protecting human rights defenders; I am confident that our group - all women except for myself - came up with some very creative thinking and several concrete, doable proposals around the issue. We closed the second day with a Twitter campaign in solidarity with our Kenyan comrades after the extrajudicial killing (apparently by police) of a human rights lawyer, his client, as shown in the photograph below.

Apart from making great human rights advocacy contacts in Southern Africa, particularly in Namibia and Angola where I am doing work, it became apparent that the Project's plans to turn Johannesburg into an ICORN City of Refuge perfectly dovetails with a parallel plan by the Pan-African Human Rights Defenders Network - the continental umbrella body that embraces SAHRDN - and the International Commission of Jurists (ICJ) to turn Johannesburg, Abidjan, Tunis, and Kampala into "safety hubs" for refugees, so we have already initiated a discussion around merging the two projects regarding Johannesburg. 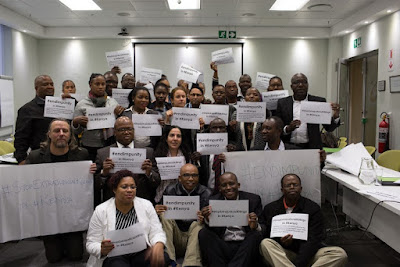