Below are my notes for a talk at the Johannesburg Holocaust and Genocide Centre for the closing of the commemoration of the 22nd Anniversary of the "100 Nights" Rwandan Genocide following the first South African screening of Beate Arnestad's documentary Telling Truths in Arusha. The film follows the genocide trial at the International Court of Justice on Rwanda at Arusha, Tanzania, of Catholic priest Father Hormisdas. 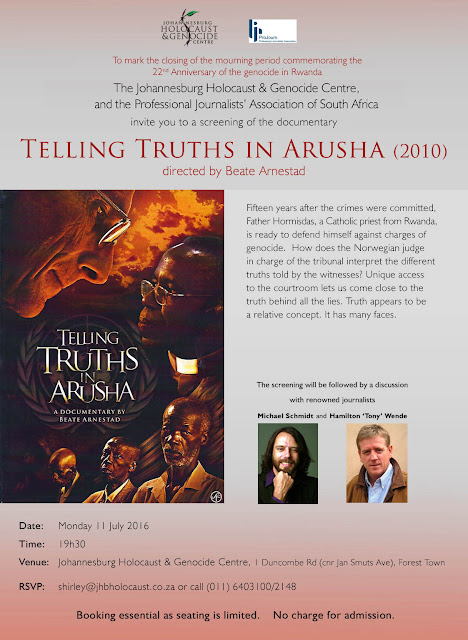 1. Thanks: Holocaust and Genocide Survivors, Centre Director Tali Nates and her staff for the use of this appropriately sombre yet light-filled venue, Beate Arnestad for the use of her film, and guests for attending on a cold night.

2. Introduction: I’ll speak briefly on behalf of The Ulu Club for Southern African Conflict Journalists, a project of the Professional Journalists’ Association (ProJourn), which hosts events like this during which the public are able to interrogate journalistic ethics when we work in communities in conflict. The Association also runs the Southern African Cities of Refuge Project (find us on Facebook) which aims at getting cities in the region like Johannesburg to become safe havens for persecuted individuals (look up www.icorn.org), which coincides with a project of Pan-African Human Rights Defenders Network to turn Johannesburg, Abidjan, Kampala, and Tunis into safety hubs for refugees – we will be merging our projects where Johannesburg is concerned.

3. Themes: A Roman Catholic priest was reported in Time magazine on 16 April 1994, ten days after the Genocide began, as saying: “There are no devils left in Hell. They are all in Rwanda.”

As we meet here tonight, it is with bitterness that I have to report that forensic and eyewitness evidence is being painstakingly compiled of year-old mass graves in Angola where MPLA forces massacred perhaps 3,000 people at Mt Sumi in April 2015, and of fresh mass graves in Mozambique as a result of the return to civil war between Renamo and Frelimo there. It is a tragedy that the political resort to mass murder – often justified on ethnicised grounds – continues unabated in Africa.

Rwandan Genocide eyewitness, US journalist Scott Peterson in his book Me Against My Brother (2000) trawled through the looted ruins of President Juvénal Habyarimana’s mansion and, sparked by items he found there – a framed photograph of Tutsi homes burning during the so-called “Apocalypse Revolution” in 1959, a book dedicated to Habyarimana by President François Mitterand, and a private Catholic chapel – speculated on three pillars of the Genocide:

● Firstly, the deliberate cultivation of Hutu supremacist ideology, driven by Agathe Habyarimana’s Akazu inner circle and its extremist Zero Network, dating especially from the 1990 publication of the genocidal Hutu 10 Commandments by the extremist newspaper Kangura! (Wake Up!), then the formation by Habyarimana of the ruling MRND party’s Interahamwe militia, and the Coalition por la Défense de la République (CDR) and its Impuzamugambe militia, and then – and this is often forgotten – the “trial runs” of massacre that had already left around 2,000 people dead in the two years before the Genocide began. 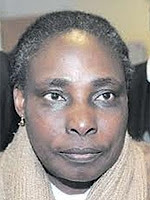 Accused but at liberty: Agathe Habyarimana

● Secondly, the unblanching support by France for the MRND regime, regardless of its growing extremism – including the uninterrupted supply of weapons shipments even during the height of the Genocide when the extent of the killings was obvious. The French flew Agathe Habyarimana and select Akazu members to safety in Paris just after the Genocide began, and Mitterand officially welcomed at the Quay d’Orsay at the end of April 1994 – during the Genocide – Hutu extremist Foreign Minister Jérôme Bicamumpaka (acquitted by the Arusha Tribunal in 2011) and CDR commander and RTLMC hate radio head Jean-Bosco Barayagwiza (later convicted of genocide, and died in 2010).

● Lastly (and this touches on the theme of the film), the acquiescence of the Catholic Church as the preparations for genocide became irreversible, especially because since Belgian missionaries had supported the 1959 Genocide that left 100,000 dead, following independence in 1962, the Church had become so integrated into the Hutu regime that the Archbishops of Kigali, including the incumbent during the Genocide, Vincent Nsengiyumva (who was killed by the RPF), were invariably high MRND leaders as well, and in some cases such as at the Ste Famille Cathedral in Kigali, during the Genocide, priests such as Father Wenceslas Munyeshyaka openly wearing pistols, expressing Hutu supremacist views and allowing the death-squads to select from among those seeking sanctuary there for killing (he was later convicted of genocide at Arusha but continues to live freely in France). 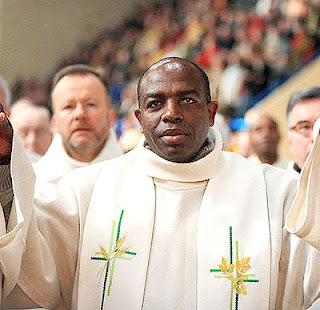 4. Introducing Hamilton Wende: Tony Wende is a South African journalist who worked as the sound-man on a BBC crew that went to Rwanda during the Genocide with the almost impossible mission objective of trying to explain why the Genocide was happening. In his book True North (1995), as with Peterson, Wende also speaks of the impact of Belgian ethnic classification in the 1950s – despite the fact that other than the so-called Tutsi royal clan, Rwanda consisted of 18 clans that were of mixed ethnicity – and Belgian support for the 1959 Genocide, but unlike Peterson’s work which has the benefit of hindsight, Tony’s work digs into the moral twilight zone of the Genocide as it was unfolding.

He uses some resonant phrases such as “spiral of madness” to describe what he was seeing – but the one that may assist us here is “Republic of Dementia” and he describes his journey into what he calls an “incoherence of darkness,” “half-drowning in a spiritual Interzone, grasping at the flimsy edges of our own rationality,” as both a physical and metaphysical journey.

Already, back in 1994 we see Tony interview the mayor of the nearest town in the Nyarubuye Parish where some 4,000 people were slaughtered by the genocidaires: the interview takes place in the UN’s Bonacco refugee camp full of tens of thousands of perpetrators of the Genocide, and as Hutu extremist radio pushes out a revisionist line over the airwaves of the refugee camp, claiming it is the so-called “invading cockroaches” who are committing genocide, the mayor, who is accused of organising the Nyarubuye massacre, turns nasty and evokes anti-Tutsi sentiments, convincing Tony of his guilt.

It is here that the French language is of assistance in that we need to distinguish between veracité (fact) and verité (truth) – and what we have seen from the film is that fact and truth are not necessarily the same thing, neither for the survivor, nor the journalist, nor the perpetrator, nor the judicial officer presiding at Arusha. And the search for a fact-based and fundamentally true justice is perhaps hardest of all. I’ll turn over to Tony at this point.

Posted by Michael Schmidt at 05:40