Covering the first democratic elections in 1994 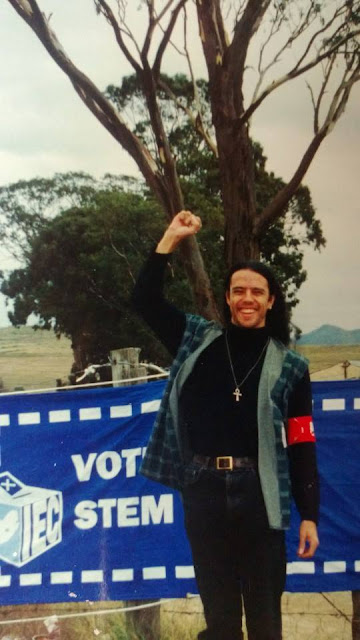 Freedom at last! At a voting station in the rural Transkei, 1994

[Extract from A Taste of Bitter Almonds]

Griqualand East against the mountains and hilly Pondoland towards the coast are the heartland of the PAC, and boasts an entrenched radicalism built on the ashes of the Pondoland Revolt of 1960, the last significant black revolt before the 1976-1977 uprising, during which the Pondo résistants ‘went to the mountain’ – a physical and symbolic gathering in their mountain fastnesses, where, in order to speak, one put aside any trappings of leadership and spoke as one among equals, a tradition that resonates strongly with me. I overnight each night at the Mount Currie Inn just outside of Kokstad, with its old-world heavily starched sheets and square dinner of roast beef, potatoes and vegetables, then each morning venture forth again, deeper and deeper into Pondoland – either along the N2 highway which runs paved, yet narrow and unfenced, along the ridge of the emerald-green hills from Kokstad, forcing drivers to dodge wandering cattle, through Mount Ayliff, Rhodes, Mount Frere, Tina Bridge, Qumbu, Sidwandweni and down to the old Transkei capital of Umtata; or into the more arid far north-east, along the tarred R56 and then the untarred R396 in the shadow of the Drakensberg – and start exploring the dirt tracks spidering off to the sides, searching for evermore remote voting stations.
Wearing the flak-jacket has become uncomfortably sweaty; on the very first day, I stopped at the roadside and, watched by a lazy cow chewing the cud, removed it and dumped it in the boot. The open, polite and even rather friendly engagements between black and white at the polls make me feel I’ll not need to put it on again. The voting has been extended for three days because many rural voting stations still lack basic materials – ballot papers, ink to mark who has voted, etc – and I suspect deliberate sabotage by the government of the PAC because similar problems are not being reported on the radio from the hastily-erected voting stations in IFP territory. The roads are full of people travelling to the voting stations. I throw my doors open and take on board as many as I can carry. I ask them who they are voting for, and with a fierce pride they tell me, ‘My vote is my secret!’, showing that at least the notion of the anonymity of the ballot has taken root; I laugh and tell them to incredulous looks that I’ve just voted PAC.
Today, on the last day of extended voting, I’m venturing ever further into the foothills of the Drakensberg. The dirt road I have taken is rocky and has obviously long last since been graded, with deep eroded channels cross-cutting it and slowing my progress. The white hired car is muddied up to eye level and coated in a thick layer of dust. The road snakes along the contours of the hills, quadrupling travelling time, then sinks down into a river valley; it’s a long time since I’ve long last seen a road sign and I’ve totally lost my bearings. I cross an old concrete bridge and wave at the women washing in the crystal waters which ripple over the boulder-strewn riverbed; they beam at me and wave back. The road climbs deeper into the hills; then suddenly the terrain changes, flattening out into a desolate and rocky plain, with the Drakensberg, which the Basotho call the Maluti, looming low on the horizon. I drive for what seems like an hour through this Martian landscape, amazed that I can see not a single living thing – and there, ahead of me, like a mirage, stands a lonely voting station. It is a simple school: a single long, brick classroom building, three thatched rondavels, and a school bell, suspended from a rickety and weathered wooden frame several metres tall. The Independent Electoral Commission’s blue-and-white plasticised canvas banner hangs between the bell tower and a stand of euphorbia cactus, the only green anywhere in sight.
Sitting in a row on a large and ancient log from a forest that appears extinct, are three Basotho women, wrapped in their traditional colourful blankets and headdresses, thoughtfully puffing on their slender clay pipes. I draw the car to a halt and climb out. White faces must be a rarity in these parts, but long-haired men are another thing altogether: the women take one look at my sweep of waist-length hair and literally fall off the log guffawing and hullaballooing! I am seized by a fit of reciprocal laughter; doubling up, I hang onto the car door for support, tears of laughter streaming down my face as the three women hoot, roll about on the ground and slap their thighs in delight.

The elections are over, and the ballots are now being counted, but the mood of jubilation is at an all-time high in expectation of an ANC landslide, which will signal the defeat of apartheid. My task is done and I have the weekend to recouperate, so I decide to head off to the Splashy Fen music festival in the Drakensberg outside Underberg. The car is so dirty it’s hard to tell it was ever white; my flak-jacket lies forgotten in the boot. I’m tired, but invigorated by all I have seen, though I’ve barely read a newspaper this week and have no way of telling how my copy, filed before deadline at 6 pm each day to a dictate typist on the news desk, has been used.
On the side of the road I’m driving along, at the junction of a farm road, I see a young black woman standing, waiting for a lift. I stop for her and she climbs in hesitantly. She smells subtly yet pungently of wood smoke, the definitive scent of poor rural folk, and is not accustomed to speaking in the white man’s tongues, so we travel in silence. Eventually, she gathers the words – and the courage – to speak:

‘You’re not going to murder me, are you?’

Posted by Michael Schmidt at 10:21