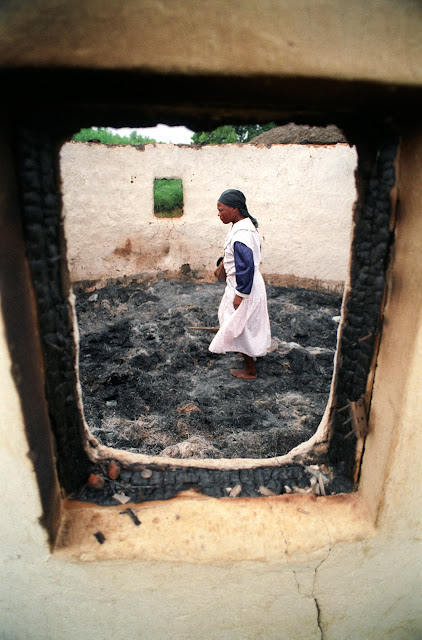 [Extract from Drinking With Ghosts]

The origins of the Christmas Day Massacre go back to
around 1992, when Shobashobane became contested
territory between the ANC and the IFP. The ANC claims
the IFP was artificially built up in the early 1990s by a
combination of police patronage and strong-arm tactics,
while the IFP claims the area was always its stronghold
and the ANC settlement there was formed by criminal
gangs. Either way, once the killings began they gained the
force of feud, dividing houses against themselves. Young
ANC activist Sicelo Gambushe, with whom I strike up a
conversation when I come across him at the roadside, is an
example of the damage wrought well before the massacre:
his mother, Nompumelelo, aged about 50, was shot dead
in an attack on her homestead in 1993 and his brother
Nkongeni, 25, an ANC self-defence unit member, was
shot dead with his own AK-47 after being captured by the
IFP in 1995. Gambushe walks me through the veld a few
metres off the road and shows me the ruins of a shop once
run by Sehla Nikwe, who was killed in 1993 for the crime
of taking a wounded man to hospital. Gambushe’s friend
Milton Khomo, 32, shows me where his body was scarred
that same year when arsonists burned his rondavel to the
ground with him still inside it; he narrowly escaped with
his life.
The burned homesteads of Shobashobane have been
rebuilt – partly with money donated by NGOs, partly
by sheer willpower. Today the taxi ranks, spaza shops
and supermarkets are brimful of people going about their
business. Tellingly, many women are dressed in slacks,
which were formerly banned by Inkatha conservatives.
Community water standpipes have sprung up and spidery
electrical lines now string the huts together. Some residents
of Shobashobane fled after the massacre, but most resigned
themselves to living quietly alongside those they knew to
be murderers.
But Dumazile Nyawose says Christmas Day 1995 is
still remembered in Shobashobane with fear and heartache
as the day when death descended on them. She says that,
whenever elections loom (the ANC now controls four out
of nine wards), the killers among them start a whispering
campaign – ‘We are coming’ – but these days nothing
happens. Ten years on in these lightning-scorched hills,
reconciliation between killers and victims is far from an
easy process, she admits, but adds, ‘My heart is trying to
be right.’
At the funeral for the massacre victims, Deputy President
Mbeki swore that the killers would be hunted down and
brought to book – and 12 suspects eventually were arrested,
including the IFP’s Sipho Ngcobo. But, after serving only
two years of a life sentence, Ngcobo and the five other men
convicted of the massacre had their convictions overturned
on appeal. Today, Ngcobo is the mayor of Izingolweni.
Mazungu Nyawose is resigned to this fact: ‘I’m fine. I have
no problem with Sipho Ngcobo … I accept that Kipha died
for freedom.’
On the drive back to Maritzburg, I visit Ngcobo in
his brand-new yet strangely bare mayoral chamber at
Izingolweni, to find that he has changed his tune slightly.
He tells me that Shobashobane has put fratricide behind
it, but warns that a reversal is not impossible: ‘It is good
now because they [the people] can go freely and not get
threatened, but – and it’s a big “but” because we must be
realistic about peace – there are still elements who want to
destabilise this area.’
While still denying the testimony of those such as
Dumazile Nyawose – that he personally participated in
the slaughter – he finally admits to me at least his political
responsibility: ‘Regarding the situation of Shobashobane,
myself I was a culprit: I was innocent, but involved in
politics … I bear collective responsibility.’

Posted by Michael Schmidt at 11:02