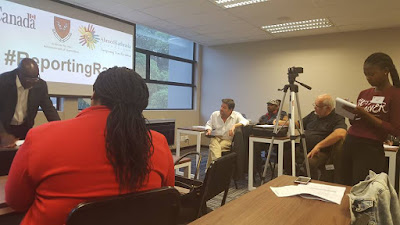 
Time will tell what themes dominate the news in 2017 in South Africa, but the scourge of ingrained social racism and the structural enablers of white privilege hogged headlines in 2016. I covered the Institute for the Advancement of Journalism  / Ahmed Kathrada Foundation Reporting Racism Conference in October for ProJourn's Southern African Cities of Refuge Project. Yvonne Chaka Chaka and Sibongile Khumalo sang for us and there were some particularly strong presentations, especially Joe Thloloe recalling Black Wednesday 1977, Achille Mbembe and Micah Reddy on today's Fallist movements, Karen Turner (Temple U, USA) on the self-interrogation of journalism students regarding race and ethnicity in the light of #BlackLivesMatter, and David Smith on allowing a plurality of voices on-air to combat hate radio in Africa. Here is a brief story on the Mbembe-Reddy debate:

The race debate in the electronic age is like a virus in terms of it being a disease, a contagion, consisting of outbursts, and spreading like wildfire, resulting in sets of things burning, stated Prof Achille Mbembe at the Reporting Race Conference held in Johannesburg over 18 – 19 October 2016.
A Cameroon-born, Sorbonne-educated philosopher, Mbembe of the Wits Institute for Social and Economic Research (WiSER), has argued for academia to be “decolonised” by reaching beyond Western knowledge sources, yet he is a leading liberal critic of the “Fallist” student movement.
The conference, hosted by the Ahmed Kathrada Foundation, the Institute for the Advancement of Journalism and the High Commission of Canada, is the conclusion to a series of debates on race, and marked the 39th anniversary of the “Black Wednesday” closure on 19 October 1977 by the apartheid state of 18 organisations and three newspapers, and detain Black Consciousness journalists and activists.
Mbembe argued that the #FeesMustFall movement had foregrounded racism in problematic ways: “Liberalism is anathema for a lot of those young activists today… because of its perceived complicity with racism,” he said. “The idea of a constitutional state is central to our dispensation, and is typical of liberalism. But they do not only reject the racism of liberalism… it is a wholesale rejection of liberalism.” He said it was worrying that the students spurned electoral representative democracy as either corrupting, or as inherently illegitimate – claiming that their call instead for “a direct democracy that is structureless, that is horizontal” was a “zero-sum game” with violence its only tool and 100% compliance with the radical line demanded “or you are a heretic,” winding up “inviting the worst horrors of state violence.”
I challenged Mbembe on the fact that the "violence" debate was a red herring as the state itself had often initiated violence as in the Marikana Massacre and with the police in several cases actually starting riots with Fallist students. I also questioned his blanket deligitimisation of the liberatory aspects of Fallists politics and praxis, saying while I recognised the problem within the movement of intolerance, lack of class analysis, and what anarchists call the "tyranny of structurelessness," and would have liked to see more positive construction – strongly promised in 2015, but faltering in 2016 –  he could not ignore the positivity of the movements' direct democracy and horizontalism where these were practiced.
Mbembe did not quite answer my stance on state violence when he responded that there were only two routes for struggles for justice to take: “moral struggles when the fight is about abiding by a set of irrefutable principles like freedom and equality” which could neither be won by – nor defeated by – violence; and “purely political struggles that are framed by the principle of force.”
But he conceded: “Rainbowism did not end racism. There is a bitterness in these [student] texts that the idea of non-racialism that was the basis of the struggle has not brought racism to an end, therefore there is a rejection of non-racialism and the idea of rainbowism, which is seen as doomed.”
Mikah Reddy, the media freedom and diversity chief at the Right2Know campaign, responded that Mbembe’s critique of identity politics which had come under fire by the Fallists, was very popular as an end in itself, which lead to a politics in which all minorities were “ring-fenced” and anyone else who tried to engage with the experiences of those within the fences were seen as “trespassing.”
Earlier, Wits media studies lecturer Dr Glenda Daniels had said she felt “like a scab” in that while she supported the Fallists’ decolonisation debate, she also had a duty to work with those students who wanted to study. Yet police were only allowing white students onto campus and keeping the black students at bay as presumed protestors: “This is racial profiling.”
Press Council Executive Director Joe Thloloe spoke powerfully in closing of his experiences of detention in 1977 and his disbelief at emerging from jail months later into a world in which Stephen Bantu Biko and Robert Sobukwe were dead. Yet he found striking parallels with today’s student unrest, saying that he felt he was watching “a replay on our screens” of scenes from his youth.
Opening the conference on 18 October, former President Kgalema Motlanthe had used the example of the racial reconciliation achieved by the Blue Bulls holding their Super 14 semi-final tournament at Orlando Stadium in Soweto in 2010 to argue that “we will not be able to stop racist attitudes until we have dealt with the infrastructure backlog.”
A moment of silence was held for veteran photojournalist Juda Ngwenya, who covered the civil war in Liberia and the democratic transition in South Africa, and who died on 19 October.