Radovan Karadžić’s eyes are penetrating as they stare out of the canvas, his overlarge pupils swallowing the light, defying the viewer, challenging our humanity. But in a negative of the image, painted by artist Bradley McCallum, the pupils of the man convicted of the Srebrenica Genocide are a vacant bone white.
McCallum documented the International Criminal Court (ICC), and he is in South Africa with his exhibition of paintings of those accused by the court. It is timely given the recent reversal of two African countries’ positions on their relationship to the controversial court: in February, The Gambia reversed its decision to withdraw from the ICC, while South Africa’s High Court declared our notice of withdrawal to be unconstitutional.
The notices of withdrawal issued in October by Burundi, then South Africa, then The Gambia – with Kenya, Uganda, Namibia, and now Zambia threatening to follow suit – sparked fears that the primary international instrument of holding perpetrators of genocide, war crimes and gross human rights violations to account was unraveling on the very continent that, convinced by President Nelson Mandela, had driven its creation in 1998.
On 7 April, South Africa battled to explain to the ICC in The Hague its refusal to arrest Sudanese President Omar Al-Bashir in 2015 for genocide – and now faces possible censure by the UN Security Council for failing to uphold international human rights law. The Institute for Security Studies’ Allan Ngari wrote that the “ICC now has an opportunity to pronounce itself with finality” on the immunity enjoyed by heads of state.
In exploring the balance between humanity and inhumanity in photorealist colour-and-negative diptych in his Weights & Measures exhibition, McCallum has expanded beyond the ICC trials to look at similar processes such as the international criminal tribunals on ex-Yugoslavia, Rwanda, Cambodia, and Sierra Leone.
He has painted former Liberian President Charles Taylor, who in 2013 was the first African head of state convicted of war crimes, committed during Sierra Leone’s civil war, as well as portraits of accused found not guilty, supplemented by photographs of prosecutors, judges, and anti-impunity campaigners – plus an evolving suite of sound recordings of victims’ testimony.
At a teaser launch of the exhibition at the Johannesburg Holocaust and Genocide Center, McCallum screened a special message from Ben Ferencz, the last surviving Nuremburg prosecutor of the SS Einsatzgruppen death-squads.
“Weights & Measures has recognised the value of portraits to teach people a lesson,” Ferencz said. “You ask yourself, ‘was this person a mass-murderer?’ You will come to the conclusion that I have, that war makes murderers out of otherwise innocent and decent people.”
The ICC has come in for criticism by legal professionals such as Professor Alexander Mezyaev of Russia, a former defence counsel before the ex-Yugoslavia Criminal Tribunal, who has argued that the ICC acts “as a ‘legal’ tool for regime change, giving legitimacy to the removal of disobedient heads of state,” and aims at creating “a new body of international law which will reflect only the interests of the Western powers.”
A similar sentiment motivated the Zuma government to exit the ICC – yet McCallum stressed at the launch that the charges brought against African leaders before the ICC “were brought by African victims.” McCallum said his work was about more than guilt or innocence, but was rather intended “to open windows to discussions you otherwise might not have” about restorative justice and the fight against impunity.
After viewing the exhibition, Zimbabwean Arnold Tsunga, Africa director of the International Commission of Jurists, condemned the “African phenomenon” of the abuse of positions of sovereign power and even of the democratic process and its institutions to secure impunity for crimes against the people. He cited the cases of Kenyan President Uhuru Kenyatta and his deputy William Ruto who he said had abused their posts by playing victim and interfering with the ICC investigation into crimes against humanity charges they faced for the 2007-2008 post-election violence.
In response, one of South Africa’s leading transitional justice experts, Yasmin Sooka, said that opposition to the ICC stemmed from the fact that it was the only court in the world that did not afford incumbent heads of state immunity from prosecution, but she asked pointedly: “Do we identify only with African leaders – or do we support their victims?” 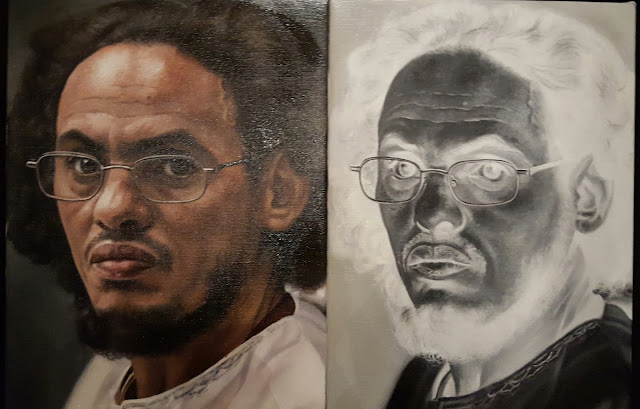 Former Ansar Dine militiaman Ahmad al-Faqi al-Mahdi, sentenced by the ICC to 9 years for the war crime of destroying cultural heritage in Timbuktu. 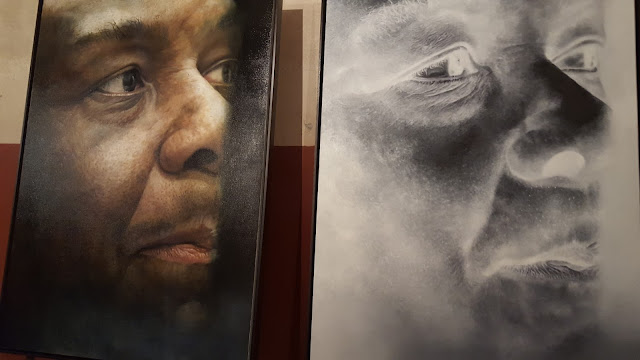 Former DRC Vice-President Jean-Pierre Bemba, sentenced by the ICC to 19 years for war crimes and crimes against humanity and fined 300,000 Euro for witness tampering. 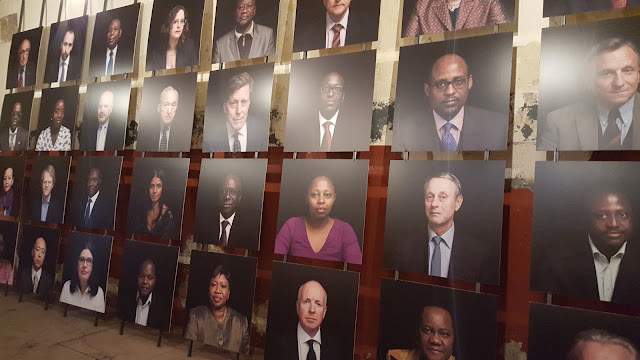 Photographic portraits of judges at the ICC in The Hague. 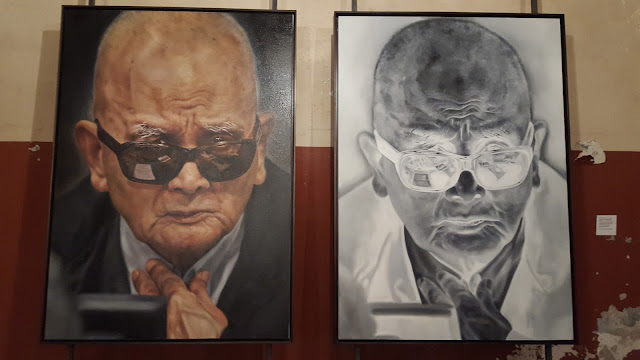 Nuon Chea, former Khmer Rouge Brother No.2, found guilty of crimes against humanity by the Extraordinary Chambers in the Courts of Cambodia and still standing trial for genocide. 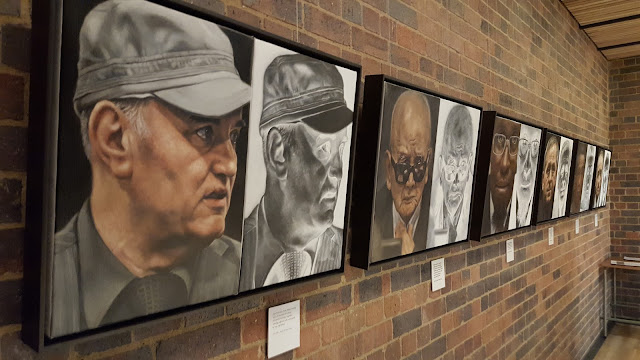 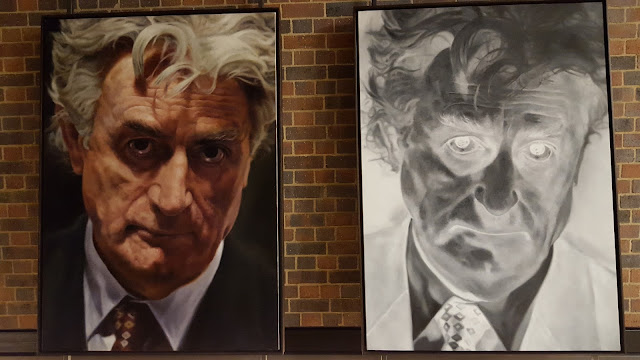 Radovan Karadžić, jailed for 40 years by the ICC for genocide, war crimes and crimes against humanity.

Posted by Michael Schmidt at 01:15