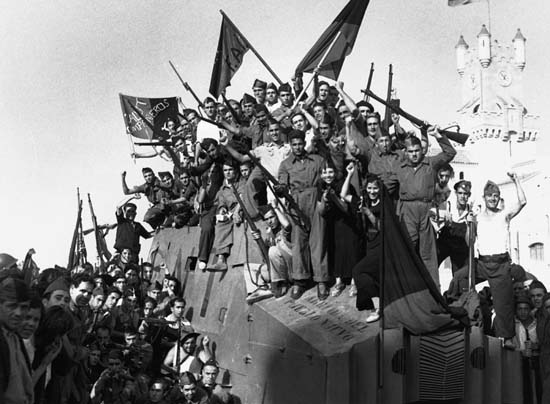 A CNT-FAI armoured car rolls off the collectivised production line, celebrated by anarchist militants, and bound for the front.

The volunteer anarchist militia who fought fascism in the Spanish Revolution are usually reduced to a few of the most famous, especially the Durruti Column - but there were scores more, as I detail in my forthcoming book In the Shadow of a Hurricane:

All officers were elected by the rank-and-file and had no special privileges, and the militias generally fell under the control of the Central Committee of Anti-fascist Militias set up by the CNT in July 1936. Within the anarchist militia, there were a number of different columns. Deployed by the CNT-FAI-JJLL from Catalonia into Aragon on 24 July, there was the Durruti Column, which fought on the Zaragoza front, lead by Buenaventura Durruti himself, at first consisting of 4,900 militiamen and militiawomen but growing to 6,000, the 2,000-strong Ascaso Column, lead by Domingo Ascaso (whose brother died in the early fighting in Barcelona), Gregorio Jover and Cristóbal Alvaldetrecu, which fought on the Huesca front, the 1,500-strong Aguiluchos Column (including 200 female milicianas), lead by García Oliver and Miguel García Vivancos, which fought on the Huesca front, the Kropotkin Battalion consisting of JJLL youth, also on the Huesca front, the Red and Black Column under García Prada on the Huesca front, the Sur-Ebro Column under Antonio Ortiz which fought on the the Calamocha front, and the Land and Liberty Column under Germinal Souza consisting of volunteers from the failed Republican attempt to retake Mallorca from the fascist rebels, and which defended the free communes of Aragon, which were being established, with the CNT in the lead, collectivising the farmlands, suppressing the fascists, expropriating the latifundista gentry, Church, and bourgeoisie, and establishing worker’s control in the cities and towns. In the Pyrennees, the Sabadell CNT would form an Alpine Battalion which fought with the UGT’s Pyrennean Column under Mariano Bueno. International volunteers – perhaps 40,000 in all – flocked to Spain. Some 250 (later rising to 400) foreigners such as the Algerian anarchist Saïl Mohamed, German IWW veteran Heinrich Bortz and Canadian IWW veteran Louis Rosenberg were organised into an International Group of the Durruti Column, under Louis Berthomieu, which had as its training base the former Pedralbes Barracks, which was renamed the Miguel Bakunin Barracks, and comprised the Sacco and Vanzetti Century (English-speaking), the Erich Mühsam Century (German-speaking), the Sébastien Faure Century (French- and Italian-speaking), and the Matteotti Battalion (Italian-speaking). Meanwhile, several hundred Italians exiled in France – many of them former anti-fascist Arditi del Popolo militiawomen and militiamen (there was actually an office of the exiled USI in Barcelona at the CNT headquarters) – formed the Malatesta Century of the Red and Black Column, nick-named the Battalion of Death, which fought on the Huesca front under Cándido Testa, while other Italians were attached to the Justice and Liberty Century of the Ascaso Column, and after May 1937, Italians formed the 25th Ortiz Division within the Land and Liberty Column. About 40% of the XV International Brigade (incorrectly but popularly known as the Abraham Lincoln Brigade after one of its subsidiary battalions), though it had been organised by the Comintern, consisted of Wobblies and unaffiliated socialists from the USA. There were only four Wobblies and one anarchist volunteer in the Canadian Mackenzie-Papineau Battalion of the XV International Brigade.

In Basque Country, the CNT had been a minority force with less than 3,000 members in May 1936, but the anarchist resistance to the fascist putsch saw their membership soar to 35,000, with 6,000 militiamen and militiawomen organised in the following battalions: the 800-strong Bakunin Battalion (CNT No.1) under Luciano Mateos, the 800-strong Malatesta Battalion (CNT No.2) under Jesus Eskauriaza, the 850-strong Isaac Puente Battalion (CNT No.3) under Enrique Araujo, the 800-strong Sacco-Vanzetti Battalion (CNT No.4) under Juan Rivera, the perhaps 500-strong Durruti Battalion (CNT No.5) under Roberto Lago, the 500-strong Celtic Battalion (CNT No.6) under Manuel Mata, plus a reserve International Battalion (CNT No.7) consisting of about 200 anarchists and others, and the 1,000-strong punitive battalion, the 1st Battalion of Engineers named after Manuel Andrés, in which numerous cenetistas served. In Santander, the CNT’s Freedom Battalion and the CNT-FAI Battalion were formed, but most anarchists were curiously members of the socialist UGT and so joined the UGT’s mixed brigades. On the northern front, the ac-hoc mixed columns numbering 10,000 that had arisen to fight the fascist menace were replaced over September to October 1936 by ideologically-defined battalions. In Asturias, out of 52 Republican battalions, the CNT organised the following ten battalions: CNT No.1 under Miguélez, CNT No.2 under Onofre García Tirador, CNT No.3 under Víctor Álvarez, CNT No.4 under Celestino Fernández, CNT No.5 under Higinio Carrocera, CNT No.6 under Faustino Rodríguez, CNT No.7 under Mario Cuesta, CNT No.8 (consisting of FIJL members) under Marcelino Alvarez, CNT No.9 under José García, and the Galicia Battalion comprising Galician refugees from the fascist invasion of their autonomous community, under Ramón Iglesias, with bases in Avilés and Colloto. In addition, the Syndicalist Party – which peaked at 30,000 members in December 1937 at the time founder Ángel Pestaña died as Republican General Sub-commisisoner for War – formed its own battalion. In the centre of the country, the CNT’s “confederal militia” mustered up to 23,000 fighters by December 1936, with battalions in Madrid and its surrounds such as the 2,215-strong Free Spain Column under Cipriano Mera, Ferrer Battalion (600 strong) under Cayuela, Orobón Fernández Battalion (600) under Miguel Arcas, Juvenil Libertario Battalion (650), and the Bakunin Battalion, and the 1,000-strong Palacios Column under Miguel Palacios, plus the four CNT Espartacus Battalions which arrived from Alicante, Murcia, and Cartagena to defend the capital (and later forming the 77th Mixed Brigade of the Republican Army). There were additionally anarchist battalions which were named after the cities of Sigüenza and Toledo which they defended, while other “cenetistas” (CNT members) integrated into Republican columns such as the 1,000-or-so anarchists who joined the Mangada Column. In Extremadura along the Portuguese border, the Pío Sopena Battalion was formed under Olegario Panchón, while in Bujalance in Córdoba, the 4,000-strong Andalusia-Extremadura Column was organised by the Andalusian CNT by merging the remnants of those who had faced the brunt of the rebel Army of Africa’s invasion of the south: the Bujalance Sparrows Century, the Arcas Battalion and the Zimmerman Battalion of Seville, the Pancho Villa Battalion from Jaén, Castro del Río and Baena, the Acoy Battalion, and the Fermín Salvochea Battalion of Almodóvar del Río and Villaviciosa under the brothers Juan, Francisco and Sebastián Rodríguez Muñoz, and in Málaga the following battalions were formed: Juan Arcas, Pedro López, Ascaso No.1, Ascaso No.2, Raya, Makhno, Andrés Naranjo, Sebastian Fauré, and Fermín Salvochea. Also from Málaga came the CEFA Column organised by the province-wide Spanish Confederation of Anarchist Federations (CEFA) under Captain Hipólito and Morales Guzmán. The Maroto Column under Francisco Maroto del Ojo (1906-1940), meanwhile conducted a successful campaign in Córdoba, in which the fascists were besieged in the city, and Granada, but failed to take the latter city because of a lack of arms.

In Valencia, the 2,200-strong Iron Column was formed by Rafael Martí, José and Pedro Pellicer, Elias Manzanera and José Segarra, and fought on the Teruel front, its membership made up of metallurgists, port workers, freed criminals, and about 600 members of the Nosotros anarchist group earning it a fearsome reputation – not only at the front but as Guillamón notes, by making repteated “visits” to the city of Valencia to forcibly “cleanse” the rearguard of reactionary elements and demand that the Republican state’s Assault Guards and Republican National Guards (the reformed Civil Guards) be dispatched to the front to fight. Also from Valencia came the 1,000-strong Iberia Coumn, formed by FAI-FIJL youth who had been expelled from the Iron Column for various reasons, plus the 1,200-strong CNT No.13 Column under Santiago Tronchoni, the 1,500-strong Confederal Column No.2, and the Malatesta Division (actually a battalion of perhaps 500) which split from the Iron Column over political differences with the ex-Nosotros group’s Pellicer brothers and which joined the mostly-CNT Torres-Benedito Column of 2,600 under Colonel Velasco Echave, which included the Jaime Cubedo Battalion of the Syndicalist Party, which by December 1936 was 30,000 strong. In that month, many fighters from of the XIII International Brigade’s Louise Michel Battalion, consisting of French and Belgian volunteers, disgusted at being used as cannon-fodder by their communist commander, defected to the Iron Column, forming its International Century. It needs to be stressed that most histories of the anarchist resistance during the so-called “Spanish Civil War” focus on the CNF-FAI confederal militia operating on the Aragon front, particularly the Durruti, Ascaso and Aguiluchos Columns, and ignore the experience in the rest of the country, with the exception of the Madrid front, and of the Iron Column – and the latter only because of its virulent opposition, alongside the Durruti Column and the Land and Liberty Column, to militarisation of the militias enforced by the Republican state in 1937. Both before and after militarisation, there were also regular Republican army units that had significant anarchist leaders or anarchist and syndicalist membership such as Gregorio Jover's X Army Corps in the Army of the East, and Cipriano Mera's 14th Division (and later his IV Army Corps) in Madrid.