I don't write as much as I should on the arts, but this piece on Ben Skinner's photography was carried in Joburg Style Magazine, Issue 22, Johannesburg September-November 2013. 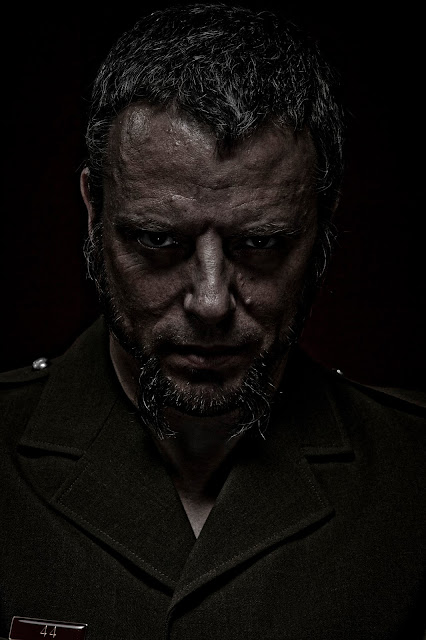 At first sight, he strikes a Bowie-like figure; tall, lanky, pallid, androgenous, and clearly a man-out-of-time. But Ben Skinner’s time is not the future, but the Victorian era, with all its dandyish sensuality and imperial bloody-mindedness bound by a thin hide of civilisation.
His woolly mutton-chop sideburns and Daliesque curled moustache are the most apparent signs of his predilections. His pale eyes are coolly appraising behind his round tortoise-shell glasses give warning of the deep arrogance of a craftsman besieged by today’s disposable, corner-cutting culture.
For Skinner is not only a perfectionist in his tailoring – whipping up with dash a woman’s pant’s suit of breathtakingly daring construction and sublime fit with consummate ease – but he appears to excel at anything he puts his long bony hands to, from set-building to photography.
His studio, at 61 Sixth Street, Parkhurst, bursts at the seams with insights into his unusual competencies. The location of bespoke corsetry firm Arwen Garmentry – run by Skinner and his partner Arwen Swan – the studio is not only the showcase of Swan’s refined and exacting wearable works-of-art in lush brocades, silks, satins and exotic fabrics, but it is the couple’s home, an aviary for a bewildering array of species, and a workshop where a small staff conjure wonders on their sewing machines.
Rowdy candy-striped corsets jostle for space on the rails with svelte silvery evening gowns, while a display case boasts antique top hats, gloves, eyeglasses, and medical instruments; the gleaming steel jib of a former X-ray machine provides the desk with an arc of light. A railway signal, shorn off its mountings by an elephant near Victoria Falls, recalls Skinner’s Zimbabwean origins. When Skinner fires up the beautiful old St Marco cappuccino machine, the room is transformed into a salon, where intellectuals and artists joust.
But when the crowds have gone, the studio becomes Skinner’s photographic playground. Mostly he shoots for Swan’s discerning and conservative market, as shown on her website www.arwen.co.za, but frequently, he lets his considerable imagination run riot.
With digital photography, many lazy practitioners simply shoot tons of images, and spend a lot of time fixing their errors with Photoshop. Not so Skinner; his work ethic sees him building his own sets, then spending an entire morning getting the lighting just right, whether it is bleached-out, ethereal, hard-etched, or sunk in gloom like an Old Master oil painting.
His “models” are startlingly real, few of them conforming to bland, shapeless fashion stereotypes, and so you will find corpulent women and hirsute men; but whatever their physique, his unerring eye draws out of them an inner essence. As an African portraitist, Skinner is aware of the traditional fear that photographs entrap the soul; like an eccentric Victorian collector with a butterfly-net, he stalks them, follows the path of their fear and captures that instance of self-recognition; true to his surname, he incisively gets under their skin.
Many of these images are nudes, but not the human body idealised; here there is both an unblinking honesty, and yet the intrigue of an inner story suggested by the moment in which the viewer finds them, like antediluvian creatures trapped in amber. Playfulness abounds, as in his “Fairy Tale” series, but also a distinct undercurrent of the macabre, as with his “Bad Nurses” series of nightmarish surgery. And the detournment of convention is signaled by a planned series turning political figures such as Black Panther Bobby Seale and apartheid architect HF Verwoerd inside out.
Never yet published or exhibited, this demanding young man is sure to soon be recognised as one of Africa’s most exciting new portrait photographers. 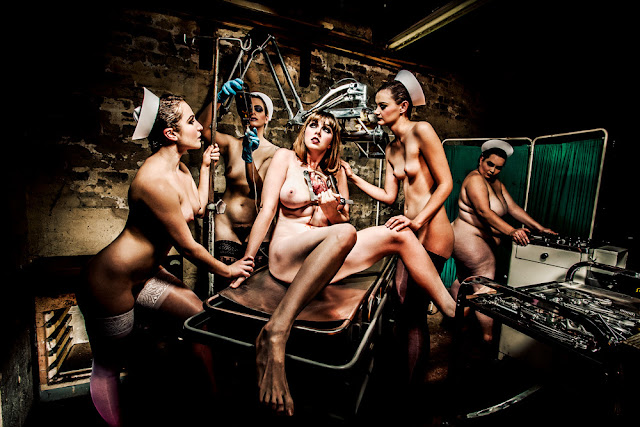