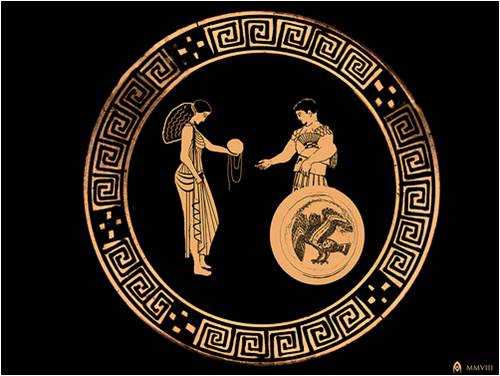 "Where is the string that Theseus laid?
Find me out this labyrinth place."
- Bauhaus, In the Flat Field, 1980

In mythology, The Scarlet Thread refers primarily to the ball of red twine given to Theseus, the Athenian hero, by the Cretan princess Ariadne to enable him to find his way back out of the Labyrinth after fighting and killing the carnivorous Minotaur who devours both men and women.

What is occluded is that the tale is a portmanteau: on the surface, a heroine helps a hero defeat a monster and escape from a place of disconcerting shadow and dire threat; but the deep maze of the Labyrinth itself provides the necessary disorienting full immersion in the “little death” of initiation.

As an ancient initiatory tomb, with which the mystery schools of the Greeks, Egyptians, Persians, Hindus, Mayans, Moche and Incas approximated death, the Labyrinth was also an initiatory womb out of which the seeker was resurrected, mastering their primordial self by reaffirming their ties to it.

This vermilion binding to the past also anticipates the future; so the Hindus wear the red Lakshmi string on their wrists to symbolise their connection to divine providence, while for the Chinese, a red thread around the ankles symbolises people who are destined to meet at a significant future juncture.

The Scarlet Thread is not a means of escaping one’s fears, but a bloodline maintaining one’s umbilical link to the netherworld, as in Pan's Labyrinth where the red ribbon of blood running from Ofelia's nose as she lies dead – in alternate reality enthroned – connects her to the navel of the Underworld that she entered by initiatory contests, and won by sacrifice.

So, this multidisciplinary online project, The Scarlet Thread, is a creative near-future conjuncture of significant talents between women and men mastering their antediluvian selves and guiding them through the maze of life, while maintaining their illuminated bonds with the “Western Lands” of a death that is ever-present within us.