The Makhnovist free cities, their "navy" and bomber aircraft

In contrast to most accounts of the Makhnovists as "peasants with pitchforks" my book In the Shadow of a Hurricane will focus on its control of cities such as Berdyansk - and their deployment of at least one aircraft (below), four armoured trains (below), and a steamship in battle. The first proper studies of urban life under Makhnovist control are so far only available in Ukrainian: on Mariupol (Zhdanov), which had a 1917 population of 45,000, Lev D. Yarutsky, Makhno and the Makhnovists, self-published, Mariupol, Ukraine, 1995, online at http://www.padaread.com/?book=52032 ; and on Berdyansk which had a 1917 population of 47,000, Vladimir M. Chop and Igor I. Liman, Free Berdyansk: The Life of a City Under an Anarchist Social Experiment (1918–1921), AA “Tandem-U”, Zaporozhye, Ukraine, 2007, online at www.i-lyman.name/FreeBerdjansk.html. The key study on Odessa, which by 1914 had a population of 481,000, and of powerful anarchist formations based in the port city such as the Union of Black Sea Sailors (SCM) of 1906-1918, is also in Ukrainian: Viktor A. Savchenko, Anarchist Movement in Odessa 1903-1916, Almanac Publishing House, Odessa, Ukraine, 2014, but the second volume on the period 1917-1929 is yet to be published. Thanks to Ukraine specialist Malcolm Archibald for directing me to these sources.

French-designed Farman 30 biplane bomber as flown by the Makhnovists, built under license in Berdyansk

The RPD’s [Revolutionary Insurgent Division's] transformation from a Black Guard guerrilla unit into a specialised modern military formation, the 3rd Dniepr Brigade (3rd DB) was complete – and this was the “Black Army” that, with several captured armoured trains, liberated the Azov Sea port of Berdyansk on 15 March 1919. Chop and Liman describe the taking of Berdyansk in great detail. [This includes the establishment of the Berdyansk Free Soviet there, but I have extracted this section for the purposes of this post]. Chop and Liman stress: “The role of Berdyansk in the history of Makhno is unique. The city was extremely important for the Makhno republic, ‘a free homeland of anarchy’. It was the only complete port of this political formation, the city where the navy and air forces of the Makhno movement first began to form. It was in Berdyansk that for the first time, in full swing, the Makhno and Bolshevik ambitions and elites were in competition for the city center. But this is not the main thing. Berdyansk was the longest of all the cities of Ukraine and Russia under the control of the Makhno rebels. Six times they were in combat, then bloodlessly seized the city and managed it for a long time, carrying out measures of its internal policy. For the first time – in March - June 1919, the second time – in October - November 1919, the third time – in December 1919, the fourth – in November 1920, the fifth – in December 1920, and, finally, in the sixth – in January 1921.”

In the city, which was an important wheat, leather and wine market and industrial centre of agricultural machinery and war materiele production, the Makhnovists found the Shroeder & Matias aircraft factory where the remains of five Farman 30 biplanes sabotaged by the Whites had been left; these were cannibalised by the Makhnovists to make one complete aircraft – the RPD’s sole operational combat aeroplane, armed with a machine-gun and capable of carrying several small bombs. Chop and Liman note that the 3rd DB aircraft was soon flown against enemy forces in taking another Azov port, that of Mariupol to the east of Berdyansk, on 29 March: “The plane took part in the capture by the Makhnovists of Mariupol, from March 28 to 29, 1919; the Farman-30 had a sufficient supply of fuel to fly from Berdyansk to Mariupol and to return. In addition to conducting intelligence, the airplane threw bombs on the territory of the Mariupol port, focused on enemy artillery. In addition to the White Guards, there were also troops of French interventionists and Czechoslovak legionnaires.” The Makhnovist capture of the Azov ports lead to the seizure of enormous quantities of ammunition and equipment from the fleeing Whites, while the 2nd Brigade of the Zanoprovsky Division under former Tsarist officer Nikofor Grigoriev liberated Odessa. In mid-March, two carriages of anarchist literature were sent to Berdyansk and Mariupol, accompanied by anarchist (Nabat?) and Left SR militants; detained by the Reds, their ownward passage had to be negotiated by the Makhnovists.The Farman 30 was used to dramatic effect once more on 31 March when Makhno, uncovering a Boslhevik-sponsored plot to assassinate him, was flown in the plane from Berdyansk to Gulyai-Polye in two and a half hours, roused a local Makhnovist unit which captured the plotters and shot them immediately. Chop and Liman write, however, that “Makhnovists would [in the future] be able to capture airplanes several times as trophies. But, in the absence of skilled pilots and fuel, they would never rise into the air."

Chop and Liman write that even though the Whites had evacuated the bourgeoisie from Berdyansk on the last available gunboat and steamer, leaving the port with no vessels of any size or fighting capacity, in early April the Makhnovist commander Seymon Karetnik acquired a steamer which his men used to ply between Mariupol and Berdyansk; the Makhnvists now had the core of their own tiny navy, crewed by sailors sympathetic to the revolution, likely including members of the famous Odessa-based anarcho-syndicalist Union of Black Sea Sailors; the Makhnovists apparently later acquired a fleet of tugboats too – but this requires further research: “A little ship was repaired a week after the appointment of S. Karetnik in Berdyansk. The head of the garrison took it under his personal control and wanted to make a visit of respect with the ship to his neighbors, to the commandant of the Makhnovists of captured Mariupol… Vasily Kurylenko. For the first time in the history of the Sea of Azov from the port of Berdyansk came a ship with a black-flagged mast.” The authors note that this was a dangerous voyage as the Azov detachment of the White Don Flotilla including the submarine Seal was still active, and “in the sea also swam British and French warships. Just at Mariupol, there were French gunboats and destroyers. They were in talks with the Makhno delegation regarding the fate of coal stored in the Mariupol port. And, at the very height of these negotiations, S. Karetnik's steamer under a black flag broke through the line of French ships. The command of the latter was rather angry. The forceful action of the Karetnik ship seemed to disgrace the French tricolor. The French even demanded to give them the Berdyansk steamer, but the Makhnovists categorically refused to do so. Rather, travelling back and forth from the port of Mariupol, the steamboat was not released to the French.” This amusing event reveals firstly that the Makhnovist vessel was probably a civilian craft – else Chop and Liman would have called it a gunboat or somesuch – though doubtlessly, it was weaponised with makeshift armament like artillery and machine-guns, and then that in the fluidity and chaos of the Civil War some highly unusual situations could develop, as with the French forces trying to beg coal off the Makhnovists who had just expelled them from the port. Vasily Kurylenko, who had joined the Makhnovists at the end of 1918 after serving after the outbreak of the Revolution as the head of the Yekaterinoslav Military Bureau, was installed as Mariupol’s military chief. He was awarded the Order of the Red Banner by the Bolsheviks for his actions in a string of six battles that included taking Berdyansk and Mariupol, and his 1st Novospasivsky Divison garrisoned the city. 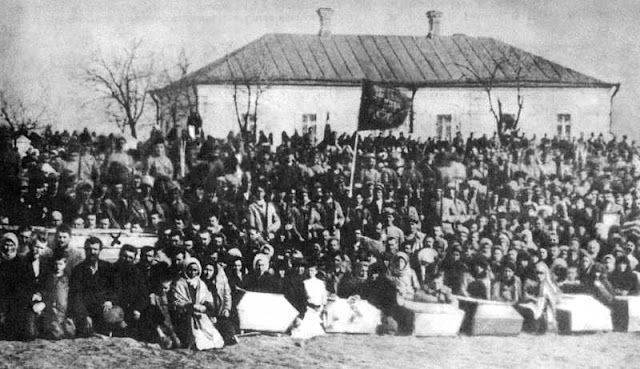 The RPD's 1st Novospasivsky Detachment poses for the camera with its black flag flying.