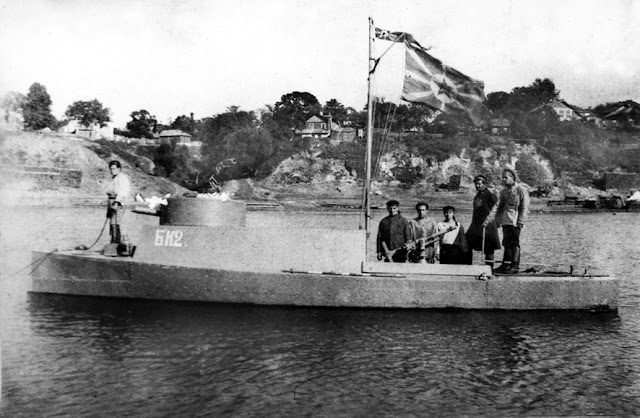 Armoured Boat No.2, 1st Squadron, Dnieper Military Flotilla, during the Russian Civil War. It had a crew of seven, which, from the design I take to be a captain-pilot, fore Maxim-turret gunner, aft (anti-aircraft?) gunner, and four naval infantrymen/women who, during combat would fire through armoured ports in the vessel's flanks, or who would be deployed ashore in support of ground forces. Not sure what flag is being flown, but it sure isn't the Bolshevik Navy's saltire cross!

I have previously written about the Makhnovist "Navy", a small force consisting it seems mostly of riverine and coastal tugboats fitted with rudimentary armament under the command of Seymon Karetnik, but flagshipped by a converted, armoured and armed civilian steamer which plied the Sea of Azov between the Makhnovist-occupied ports of Berdyansk and Mariupol in 1919. This fascinating tale is told in a great Russian-language book, Vladimir M. Chop and Igor I. Liman, Free Berdyansk: The Life of a City Under an Anarchist Social Experiment (1918–1921), AA “Tandem-U”, Zaporyzhia, Ukraine, 2007.

Now, it seems that there was another Makhnovist-linked naval force, the Dnieper Military Flotilla, ordered to be formed on 12 March 1919 by the anarchist-friendly Bolshevik commander Vladimir Antonov-Ovseyenko who was close to anarchist commander Maroussia Nikovorova whose armoured train, the Free Combat Druzhina, had liberated four Ukrainian cities from the Whites in 1918, laying the groundwork for the rise of the later Makhnovist Insurgent Army of the Ukraine (RPAU) in 1919. The Flotilla initially consisted of the following vessels:

1st Squadron – the Charlotte, and Armored Boat Numbers 1, 2 (pictured above), 3, 4, and 5;
2nd Squadron – the Courier, the Apollo, and the Samuel; and
3rd Squadron – the Arnold, the Faithful, and the flotilla flagship, the Admiral;
plus seven support vessels which would have included ammunition and fuel bunkers, and at least one tugboat.

I am still researching this but the named ships in the flotilla were likely to be armoured steamers of the "river monitor class" which were "purpose-built, armored, low-board, shallow-draft vessels designed to attack enemy fortifications, forces, or water craft in coast or river defense... There were several types, but typical was a vessel with a displacement of 130–150 metric tons, 140–200 horsepower engine, capable of 14 knots per hour (26 kilometers), armed with two 122 mm howitzers, two 40mm cannon and three machine guns or three 76 mm cannon and four machine guns." The description is from Lester W. Grau, River Flotillas in Support of Defensive Ground Operations: The Soviet Experience, The Journal of Slavic Military Studies, 2016, but his study is of Civil War-era flotillas such as the Dnieper which were reactivated in the 1930s and fought in WWII, so the armaments he cites are most likely later, updated armaments, but it gives you some idea of the sort of vessels likely to have been in the Civil War-era flotilla. Many vessels were, in fact, converted civilian paddle-wheelers, barges, coast guard vessels, or small steamers such as Karetnik's flagship.

The Wikipedia entry (sigh: I know!) on the Flotilla states that its "combat vessels were of two kinds: gunboats and armored boats. The gunboats were usually conversions of boats confiscated from Kiev shipowners, on which were installed one or two guns of 37–152 millimetres (1.5–6.0 in) calibre (fore and aft, if two guns) and up to six machine guns – Hotchkiss, Maxim, or whatever was available – with some iron or steel sheet bolted on for protection if any was available. The armored boats were purpose-built patrol craft inherited from the Imperial Navy; their armament consisted of one Maxim machine gun in a rotating turret, with a crew of 7." The Flotilla carried Special Companies of marine infantry who would be deployed ashore in battle.

According to Yuri Glushakov, The Revolution Is Dead! Long Live the Revolution! Anarchism in Belarus 1902-1927, SzSS, St Petersburg, Russia, 2015, the Dnieper Military Flotilla's first commander the revolutionary sailor A. V. Polupanov, a Donbas miner, and "a person colorful and rebellious" who had in 1918 been commander of the armoured train "Freedom or Death", which had served on the front alongside Nikiforova's armoured train and the Makhnovists. The Flotilla's crews were selected in Kiev from Black Sea and Baltic revolutionary sailors. Glushakov notes that the crews remained staunchly partisan with only 63 Bolsheviks and 40 sympathisers among its 2,300 personnel in 1919: "The Flotilla lived Makhnovist ideals, and there were many such who, having visited Makhno and having got into the Flotilla, were not averse to joining him again." An early disaster in battling against the Green warlord and pogromist Daniil Illich Turpilo 400 rebels of whose self-proclaimed "Army of the Independent Soviet Ukraine" on 11 April 1919 assaulted the Flotilla at dock in Kiev from the  steamer Baron Ginzburg, later capturing the Flotilla vessels Dnieper, Salubrious, Gogol, Charlotte, and Zeus. After six campaigns against Turpilo by the FLotilla in support of some 21,000 Red Army troops, he was defeated in July and killed in November 1919.

Such was the Flotilla's aversion to regimentation that Trotsky replaced Polupanov on 13 September 1919 with a Bolshevik named Smirnov who was disliked because of his love of the officer caste; nevertheless, though Smirnov purged the Flotilla of 65% of its sailors, several hardcore anarchist ideologues remained. Glushakov cites the case of M.V, Sednev, a sailor from the cruiser Askold, who had served jail time for mutiny in Vladivostok in 1907 during the 1905-1907 Revolt. After fighting with some distinction against White Polish forces over the spring and summer of 1920 - especially its marine infantry - the Flotilla's three squadrons were dispatched to two separate locations: the Berezhinsky and Sozh Squadrons to Gomel in Belorrussia, and the Southern Squadron to Yekaterinoslav in Ukraine in the Makhnovist theatre of operations - which suggests further opportunities for fraternisation between the revolutionary sailors and the anarchists. The Flotilla was disbanded in December 1920, though several of its vessels were rehabilitated and put back into service in the 1930s.

Danube Military Flotilla Gunboat, built in 1916; here the side gun-ports through which the naval infantry could fire their rifles can be clearly seen.

A 1916 Russian steamer converted into a gunboat. Perhaps the Makhnovist "Navy" flagship under Seymon Karetnik was similar? It seems to be about 17m in length.

A small armed tugboat of the sort believed to be operated by the Makhnovists. I have suggested a similar scale to that of the gunboat above, but it's pure guesswork based on the vertical height of the pilot's houses. 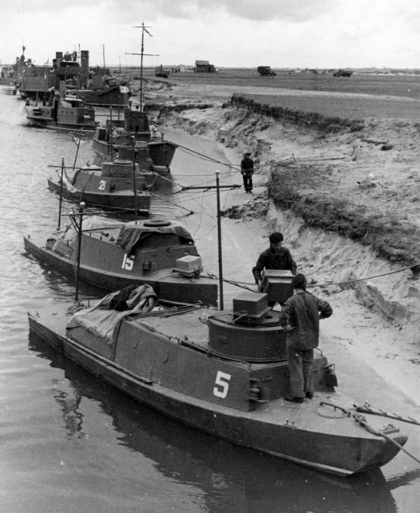 The Dnieper Military Flotilla - probably in its 1930s reincarnation - showing the small Gunboats and, in the background, larger craft including what looks like a River Monitor.