Mozambique: Change is in the Air 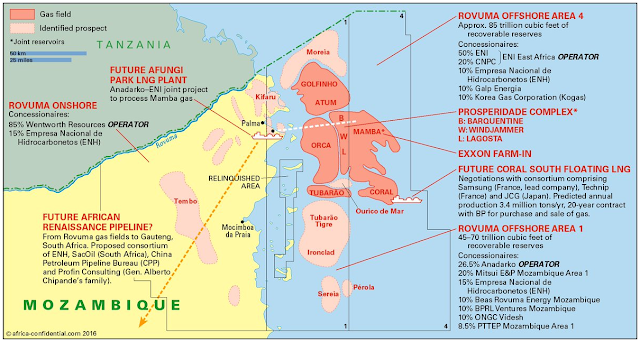 Mozambique's liquid natural gas fields. The map was produced in 2016 by Africa Confidential.

When Renamo leader Alfonso Dhlakama died unexpectedly on 3 May 2018, there were fears that it would upset the Mozambican peace process between Renamo and Frelimo. It was also unfortunate as I had been waiting for some months to interview the reclusive former rebel leader whose movement had once been a proxy of Rhodesian then apartheid South African intelligence, making him something like a Mozambican version of Angolan rebel leader Jonas Savimbi (whose killing I reported on in 2002); I had been assured by his aide-de-camp that the Dhlakama interview was imminent, so was disappointed at the news of his death. Here's a piece I wrote in March last year on the peace process - and Mozambique's emergent liquid natural gas industry.

The extension of the ceasefire announced on January 3 between the Mozambican armed forces and opposition guerrillas is holding – and a peace process now appears imminent, as gloom over the country’s debt crisis is somewhat dispelled by progress on exploiting its gas reserves.
Despite ranking 180 out of 188 on the UN’s Human Development Index, liberalisation saw the economy grow at a blistering 7-8% of GDP by the mid-2010s, and in September 2015, Mozambique was declared landmine-free. Meanwhile, the discovery in 2010 of offshore gas reserves – at 2.8 to 5 trillion m³, the biggest find in the world in a decade – promised the country an influx of US$100bn in investment, which would make the country the world’s third-largest liquid natural gas (LNG) exporter within a decade, the IMF estimated.
But then it all exploded in Mozambicans’ faces: a disputed election result in 2014 saw Renamo take up arms in the hinterland again, despite occupying almost two thirds of the seats in the Assembly of the Republic; while three security-related companies, Ematum, Proindicus and MAM, defaulted on loans illicitly guaranteed by the Armando Guebuza government over 2013-2014, adding 20% to the country’s foreign debt, and resulting in the suspension of financial aid from the IMF, World Bank and all Western donors and funding agencies. MAM’s US$535m loan was to build shipyards to service the offshore gas rigs.
So even though the Renamo-Frelimo conflict is not fuelled by gasfields bidding or the debt escalation, sighs of relief greeted the extension of the ceasefire, negotiated in two phonecalls between President Filipe Nyusi and Renamo leader Afonso Dhlakama, bypassing an international team of mediators led by EU representative Mario Raffaelli. Raffaelli said the team would only return once invited by a joint commission set up by Frelimo and Renamo to iron out a peace deal. But though that commission stopped work in December, on 3 February, a working group was appointed to resolve the military impasse – and another to draft constitutional amendments and legislation on the decentralisation of power.
Veteran Maputo journalist Paul Fauvet told me that “Everyone, Frelimo, Renamo and the second opposition party, the MDM, agrees that the constitution should be amended. But neither Frelimo nor the MDM will accept Dhlakama simply appointing provincial governors in the provinces he claims that Renamo won in the 2014 general elections. A constitutional amendment requires a two thirds majority in parliament, and Frelimo plus the MDM don't have two thirds. If Renamo is not on board, there can be no constitutional amendment.
“The simplest solution would be for the elected provincial assemblies to appoint the provincial governors. Given the current make-up of the assemblies, that would result in Renamo governors in Sofala, Zambezia and Tete, and possibly in Nampula (depending on how the sole MDM assembly member casts his vote). Frelimo would have the governors in the other six provinces.”
Mozambique is scheduled to hold municipal elections next year and general elections in 2019, so there is pressure to amend the constitution before then. Last year, leading Frelimo intellectual and former security minister Sergio Vieira warned that the ruling party was in danger of losing the coming polls as it was “degenerating” while “a crowd of new crooks” looted the state.
The silver lining is that the gasfields investment is steaming ahead, with an US$8,5bn refinery announced in December, and production of about 3,4m tons/year over 25 years expected to start flowing from the Area 4 gasfield in 2022. According to Natural Gas World, last month South Korea’s KOGAS green-lighted investment of US$513m in a floating LNG rig over 2017-2022 and a guarantee of up to US$640m of the facility’s debt.
Area 4 rights are divided at 10% each between KOGAS, Portugal’s GALP, and Mozambique’s ENH, with 70% held by ENI East Africa, consisting of Italian operator ENI and China National Petroleum Corporation (CNPC). All boards have approved their investments with CNPC’s the last decision awaited before construction begins.
Meanwhile, a second consortium led by US-based Anadarko is expected to announce its investment in Area 1 shortly, and the latest gasfields tender awards, to Royal Dutch Shell, Norway’s Yara International and London-registered GL Africa Energy, have been hailed for boldly excluding Frelimo old guard bidders close to President Nyusi.
Fauvet said he did not expect gas to distort the Mozambican economy as oil had in Angola: “Nyusi is well aware of the dangers of excessive reliance on hydrocarbons, and repeatedly stresses the need for further investment in areas such as agriculture and tourism. So I remain optimistic.”