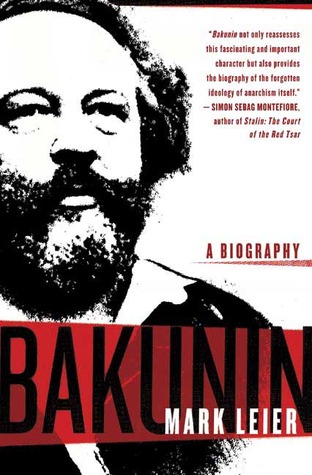 As choking cement dust settled over Manhattan in the wake of 9/11, journalists pawing through the wreckage of history for a precedent came across the almost forgotten bombing of Wall Street by Lettish members of the Anarchist Black Cross in 1920 that killed 38 people and injured scores others. It had been an era in which anarchism wore the mantle of most feared sect to the propertied classes (Interpol had its roots in international summits in Rome and St Petersburg in the 1890s to combat anarchism, and an anarchist loner had assassinated US President William McKinley in 1901), the master of disaster was presumed to be long-dead anarchist barricades fighter and counter-Marx polemicist Mikhail Bakunin.

Bakunin's tumultuous life, often on the run, often in the firing line, had the effect of both increasing his dangerous aura and the influence of his emergent anarcho-communist ideas on the trade unions of the First International – but also fragmenting his writings and so allowing for many distortions by his enemies. With lively prose balanced by a judicious and ultimately fair assessment of Bakunin's life and ideas, his flaws and often fruitful engagements with Marx, Leier has produced the most accessible life yet of this giant figure of 19th Century socialism.

Bakunin's influence was mass-organisational: the splintering of the International in 1872 saw a tiny Marxist rump of perhaps 1,000 activists scattered internationally totally overshadowed by an enormous anarchist majority (sections in Spain boasted 60,000 members by 1873, and in Italy 30,000 members by 1874), which strength was replicated by further growth under the anarchist IWA's successor Anti-Authoritarian "Black" International, founded in 1881 by Bakunin’s successor, Piotr Kropotkin (sections in Mexico boasted 50,000 members by 1882, and in Holland 188,700 members by 1895 – the year in which the famous French CGT merged with the Bourses du Travail to establish a model that would be replicated as far afield as Senegal and Brazil).

Mikhail Bakunin “reappeared as a bogeyman after September 11,” as Mark Leier puts it, because the 1920 bombing of Wall Street by the Galleanist anarchist Mario Buda which left thirty dead, 200 injured, demolished the magnate J.P. Morgan's office, and caused $2-million in property damage was the worst prior terror attack in New York, “but his casting as the grandfather of terrorism was an exercise of mystification rather than explanation.”

Bakunin’s towering intellect has always been reduced to caricature of his supposedly chaotic nature. It speaks volumes about the proletarian threat that Bakunin’s ideas posed to power that unlike Marxism, with its state-sponsored press and comfortable academic sinecures, that his complete writings only became available in 2000 thanks to the International Institute of Social History’s multilingual CD-ROM Bakounine: Ouvres complètes.

Given that Leier’s timely biography was published several years ago – part of a wave of new anarchist movement studies emanating from Canada, not least focused on what was perhaps the highest expression of “real, existing anarchism,” the Makhnovist Ukraine – I am not going to attempt a complete review, but rather focus on a key area in the formulation of Bakunin’s thought: the women in his life.

While clearly sympathetic to Bakunin as protagonist, Leier treats fairly with his not very likeable primary antagonist, Karl Marx, to whom all his turbulent life, Bakunin acknowledged a huge debt: Marx “advanced and proved the incontrovertible truth, confirmed by the entire past and present of human society, nations, and states, that economic fact has always preceded legal and political right. The exposition and demonstration of that truth constitutes one of Marx’s principle contributions to science.” Leier also has sympathies for libertarian strains of Marxism, concluding the book by saying that “with the main protagonists now long dead, it may be possible to consider the similarities [between anarchism and Marxism] and find ways to pose the differences as a progressive, dynamic, and creative tension as we confront the problems of the twenty-first century.”

Lively, accessible and judicious, in essence, Leier’s work is a crucial restoration of Bakunin the thinker, who always tested his theories against the barricades in a manner anathema to the reclusive Marx. What emerges is a long progression from an idealistic pan-Slavism to a rigorously materialist anarchist-collectivism, Bakunin’s evolving praxis continually tested in the fires of revolt and reaction. And the clarity of his thought is revealed to be penetrating, even today. Take for example his comment on speculative capital: “speculation and exploitation undoubtedly constitute a sort of work, but work that is entirely unproductive. By this reckoning, thieves and kings work as well.”

But I want to focus briefly on a group that Leier shows to have been formative in the shaping of that intellect, the women who surrounded him in youth: his sisters Liubov, Varvara, Tatiana and Alexandra, and their friends, the Beyer sisters, Alexandra and Natalie. In the claustrophobic atmosphere of the Russian academy of the 1830s where philosophy was outlawed because it rejected received wisdom, the creation of reading circles by the most progressive students proved a crucial first step in creating a new post-Decembrist generation of Russian militants. “The two most important circles were one headed and named after Nicholas Stankevich and another jointly by Alexander Herzen and Nicholas Ogarev. Almost exclusively male, the Stankevich circle and the Herzen-Ogarev circle became centres for avant-garde thought in literature, philosophy and politics." 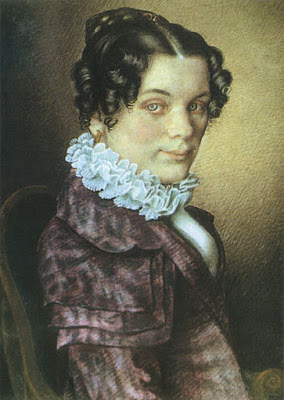 “According to Herzen and the many historians who have accepted his memoirs uncritically, the circles sprang up spontaneously. More careful historians, however, have noted that they owed much to the sophisticated discussion groups of the Bakunin and Beyer sisters. One reason Bakunin loved his sisters was the intellectual equality they shared, and they proved able sparring partners as he thought and rethought his own philosophy.” The older sisters, Liubov and Varvara, “were more conscious rebels” than their brother and the Bakunin-Beyer circle, properly called, created “the first spaces for provocative discussion” among the new generation that would eventually flower into the nihilist, narodnik, Essaire, maximalist, Marxist, and anarchist strands that would play such key roles in challenging and finally overthrowing the power of the Tsar. Curiously, it was above all the narodniks, whose quasi-anarchist philosophy of “going to the people” that drew an unprecedented number of women into their ranks.

Tragically constrained by the gendered confines of Russian society, Liubov Bakunin died of tuberculosis in 1838, and it was only Varvara who to some extent lived her ideals, following her brother Mikhail abroad and mimicking his wandering, free-thinking lifestyle. But Leier’s work suggests that the Bakunin-Beyer circle and its far-reaching influences is deserving of further serious in-depth study. Certainly, his sisters’ example early confirmed Bakunin in his sexual egalitarianism: women “differing from man but not inferior to him, intelligent, industrious, and free like him, is declared his equal both in rights and in political and social functions and duties.”

His beliefs were sorely put to the test when he allowed the love of his life, his wife Antonia, of whom he wrote to Herzen “she shares in heart and spirit all my aspirations,” to follow her heart in falling in love with and even bearing the children of fellow militant Carlo Gambuzzi. Perhaps because of this generosity of spirit, Antonia Bakunin “with no prospect of a comfortable or easy life… would stay with the errant anarchist until his death.” 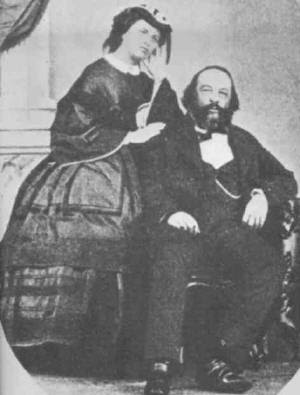 After the suppression of anarchism in Russia by Marx’s ideological heirs, it was another woman, the indomitable historian Natalia Mikhailovna Pirumova (1923-1997), who rescued much of the works of Bakunin and Kropotkin from obscurity, and whose brave and tireless work in doing so is credited with the revival of the Russian anarchist/syndicalist movement from 1979. By 1962, Pirumova was working for the USSR History Institute and had already scandalised Soviet academia with her work on Bakunin and Kropotkin in the historical journal Prometey.

By 1966, she had gathered sufficient material to publish a book on Bakunin which was extended in 1970 and reprinted in the popular Life of Remarkable People series. Despite disgruntled reviews from the official press, she followed this up with a book on the life of Kropotkin in 1972. In this period, in echo of the Bakunin-Beyer circle, she gathered around her not only historians of Russia’s socialist movements, but the Vorozhdeniye (Renaissance) literary group as well as political prisoners including anarchists and socialists who had survived the gulags. A 93-year-old Essaire who attended Pirumova’s funeral in 1997 said that in Pirumova’s presence “we stopped thinking of ourselves as outcasts, forever excluded from society by Stalin”.

It is a distinct irony that when he died, Bakunin himself remained an outcast, his funeral drawing a mere 40 mourners (albeit more than Marx’s), whereas a measure of the movement he helped initiate is given by the fact that Buenaventura Durruti’s funeral, 50 years later riskily held during the aerial bombardment of Madrid, drew 500,000 mourners. In Bakunin’s very last public fray with his pen, the tired old fighter asked only that he be forgotten so that a new generation could take up the torch of liberty.

Fortunately, while largely deprived of Bakunin’s writings, the militants who built the mass anarchist trade unions that came to dominate the organised working class of Latin America in particular – fully 50 years in Cuba, for instance, before the tiny Communist Party was founded – relied heavily on his praxis, demonstrating to our own age that a libertarian proletarian counter-power is viable and not only a pretty dream. It is for that reason that all students of mass-line liberatory politics should read Leier. 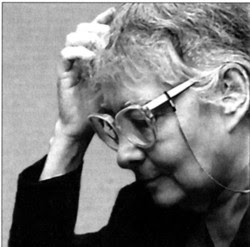 * A link to the Bicentenal Conference on Bakunin 1814-2014 held at Priyamukhino, Russia, is here.