In a Garden in Seville

This is an extract from my forthcoming book, Isandlwana - a Love Story. 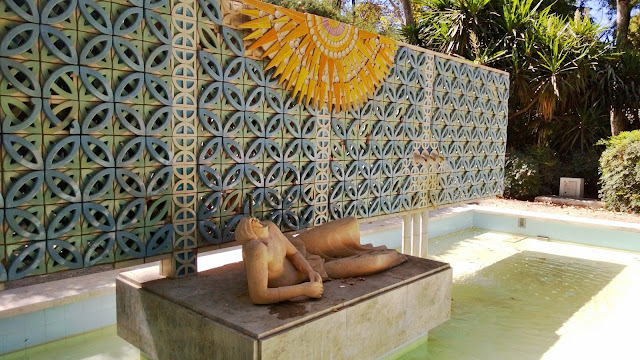 Three green parrots that look more like African Rift Valley fish, swim past, cheeping, through the entwined palms and cypresses, the cries of owls, cicadas and parakeets resonate, ringing around the memorial to Gustavo Bécquer, the Sevillian poet, where three marble women on a bench, clung together in their carven crimplenes, describe the passion, expressed in his words, of the traverse of the mystery: “The invisible atoms of the air / pulsate all around and become inflamed… / What is happening? Tell me! / Silence! It is love that is passing!”

The first woman sits low, as in a reverie, her fan is snapped shut, hair in a bun, her cheeks rounded with puppy-fat, a single rose fallen into the crease of her gown; she is anticipation. The second woman is more refined, her cheek thrown back in immodest ecstasy, her ringlets falling to her half-bared shoulders, her right hand laid over her heart; she is consummation. The third woman leans against her and looks away, a veiled mantilla crowning her ageing face, her hands clutched in sentiment; she is melancholia. Flanking Bécquer in bronze, a lively child-like Cupid, his quiver full, prepares to dart the young woman – but on the other side, an adult Eros lies dying, his bow dropped, his wings crumpled, his arm raised in fruitless supplication, a dagger buried in his back… And yet it is here that a bold cypress, of formidable girth, chosen by the poet’s friends for its longevity, surpasses its intention, slowly pushing the marble blocks aside, dismantling the monument to ephemeral passion.

Nearby, water gouts from the throats of three pipes, falling from a 1960s ceramic sunburst sky into a rectangular pool that is underfilled, a backdrop to a reclining stone statue of another woman, whose stone head has been removed by thieves. In a pool two young girls, very blonde, swim in their shorts to beat the heat; emerging, water runs down their thighs; they tremble at the cloud of my passing.

Posted by Michael Schmidt at 21:42