Trawling though my writings, I came across this vignette written in 2008 for a Latin American journal concerning myself and my friend and comrade Bobo Makhoba who died a year ago (one of his obituaries is here: Bobo Makhoba obit 2016). Bobo was a remarkable human being and one that I am proud to have known, but his trajectory and mine demonstrate the continuity of racialised apartheid differentials in my society: if you are working class and classified "black", your life expectancy is much shorter than if you are lower middle class and classified "white". He was a committed militant anarchist and I miss his dynamic presence in my life. 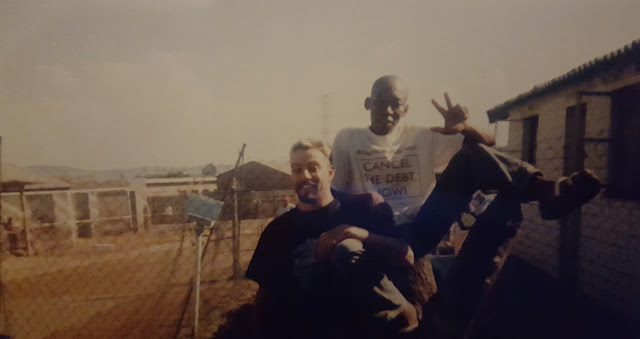 Bobo & myself at what turned out to be a very influential party-cum-meeting in Dlamini, Soweto, in 2003.

Michael Schmidt, a journalist and writer, was born into the comfort of a lower middle-class home in Johannesburg, and was classified white under apartheid law. He was drafted into the South African Defence Force during the Insurrection and states of emergency, which had the unintended consequence of politicising him. Exposure to the naked, murderous power of the state while in the army moved him towards anarchism which he embraced as a student in 1987 and became involved with the Durban Anarchist Federation, one of the semi-clandestine organisations whose militants went on to form the Workers’ Solidarity Federation, the forerunner of today’s Zabalaza (“Struggle”) Anarchist Communist Front. He has been instrumental in the theoretical development of southern African anarchism as well as maintaining the movement’s international relations, not least with Chile.
Schmidt met Bobo Makhoba, an itinerant electrician and soccer coach, at a 20,000-strong social movement march on the World Summit on Sustainable Development in Johannesburg in 2002 and together Schmidt and Makhoba were among the founders in 2003 of the ZACF. A decade younger than Schmidt, Makhoba was born into poverty in Soweto, and was classified black. He was politicised by the violent turmoil in the townships in the 1980s and had moved towards anarchism by 2002 in reaction to the ANC’s neoliberal policies. He was instrumental, as a “guerrilla electrician” in helping illegally reconnect some 25,000 houses in Soweto after the ANC-led state cut off electricity supplies in a neoliberal cost-recovery drive.
Recalling the 1985-1990 Insurrection, the two described their widely differing experiences of violence under apartheid.
Makhoba: “I live in Dlamini, Soweto, with my mother and younger brother. In the ‘80s, things were rough here. The ANC comrades were trying to establish control over Dlamini, which had originally been a stronghold of Azapo [the socialist and black consciousness Azanian People’s Organisation]. Every morning when I went to school, I’d come across the bodies of Azapo people lying in the road who had been murdered by the ANC during the night. It was frightening. Eventually the ANC pushed Azapo out of the area completely. Even today, we struggle to get our own [anarchist] projects running in the area, because the ANC breaks everything down.”
Schmidt: “When I was doing basic training in 1985, a group of us was used as the ‘mob’ against which those training as lance-corporals would hone their riot-control skills. We pelted them with tin cans and they fired at us with blanks; orange smoke substituted for tear-gas, but we had to lie down and play dead for two minutes if we were ‘shot’. One guy took a bead on me and pulled the trigger. Lying there in the dust with the chaos of armoured vehicles and figures running through the orange smoke, I realised that if the scenario had been real and I had been black, I would have been shot dead for throwing a harmless tin can. So I resolved that if ever ordered to open fire on an unarmed person, I would instead gun down the officer who gave the command.”
Makhoba’s activity with the ZACF subsequently lapsed, mainly because job-hunting took him all over the region, but he remains an active anarchist organiser wherever he finds himself. Schmidt served as the ZACF’s international secretary and an anarkismo.net editor.